Symptoms To Watch For In Your Dog: Excessive Head Shaking

August 08, 2013
You might have noticed that when talking about symptoms, sometimes a qualifying word is included, such as excessive panting, excessive drinking, excessive head shaking. That is because these are normal behaviors and whether or not there is a problem is a question of degree. 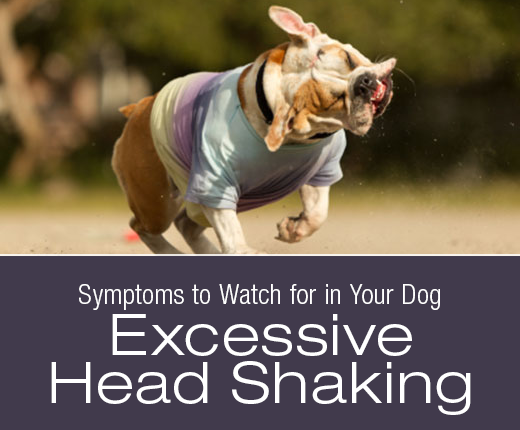 Dogs will shake their heads in response to any irritation, such as pain, an itch, a tickle or a bug bite.

If your dog is shaking their head persistently, you need to pay attention and look for a cause.

On our summer walks, JD will shake his head quite often, to fend off bugs. Deer flies in particular seem to like him. I think they know they can drive him nuts. Jasmine was much less concerned about them, she was a bush dog at heart. It was me who was following her around and chasing them off. She didn't seem to care.

The other day, on the way from the farm, JD kept shaking his head.

This was cause for concern and we were going to check his ears when we got home. He kept shaking and shaking ... and then we saw an ant waltz out of his ear. There was our culprit. The shaking stopped.

When an especially mean stray tick got on Jasmine's ear, her instinct was to shake her head.

(Stray tick because it was one of the only two we ever found at the ranch.)

The bite was painful for Jasmine though, so every time she started to shake her head she'd cry a little, stop and hold her head down, tilted towards the affected ear.

This immediately alerted us to a problem and we found and removed the invader.

When your dog starts shaking their head like that, examine the ears, eyes, head, neck and skin carefully. Pay particularly close attention to the ears.

Some culprits are obvious and easy to deal with. Some require attention of your veterinarian.

A common cause of head shaking is otitis, inflammation of the ear canal. Grass awns, ear mites and other things might be at play but, allergies are also very common causes of ear inflammation.

If there is redness, swelling, discharge or bad odor to the ears, it's time to see your veterinarian. If pain is involved, see your veterinarian right away. If you have a reason to suspect a foxtail, also don't delay. Those nasty little things can travel throughout your dog's body and cause serious damage.

Some breeds are also susceptible to ear vasculitis, which is inflammation of the blood vessels in the ear flap.

This condition typically comes with thickening of the ear margins, which eventually ulcerate and crust over.

Dogs with balance issues, be it from trauma, stroke, inner ear infection or vestibular syndrome, might shake their heads in an attempt to relieve their symptoms.

Not only is excessive head shaking a symptom of a problem, it can actually be a cause for one as well.

Sometimes a dog can shake their head so much that it will cause the blood vessels in the ear flap to rupture, resulting in a hematoma.

This will look like a swelling of the ear flap. It really is a pocket of blood and it will cause your dog to shake their head even more. Ear hematomas require veterinary attention if they are to heal without permanent disfigurement.

All this refers to voluntary head shaking.

This is what we typically picture as a head shake. There are such  things as involuntary head tremors, which are another story all together.

Further reading:
Head shaking - an ear of an issue!
Why Does My Dog . . . Shake His Head All of the Time?
My Dog is Shaking His Head