I am definitely guilty of having favorites. I cannot help it. I am too attached to my job and even more so (like by a degree of a hundred) to some of my patients. Levi is one of them, without a doubt.

When he has a problem his parents can call me about it.

It doesn’t matter what it it or at what time it happens. I am one phone call away, and I worry for him as much as they do.

This time, (of course it was an already too busy Monday), the clinic phone rang.

It was Levi’s mom to say that he had just eaten almost 200 gauze squares. I didn’t even wait to pick up the phone to hear the explanation I just told the receptionist to tell them to come in right away.

Hasn’t everyone heard about the human patients who complain of chronic stomach pains months to years after they have had abdominal surgery? 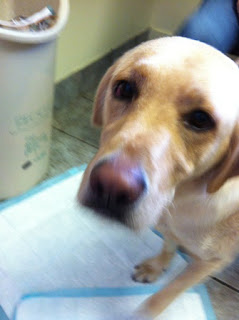 And after months to years of complaining of nondescript ghost abdominal pains find out that someone left a gauze square behind in their belly which is now adhered into a big ball of intestinal mess that has to be surgically dissected out?

As I waited for Levi to arrive I thought to myself how impossible it would probably be for close to 200 gauze squares to make it through the GI tract without clumping up together and plugging up his entire internal plumbing system.

He had to come in right now and I had to hope that he would vomit them all up.

Levi, bouncing, dancing, wagging, happy 80 pounds of joy, arrived a few minutes later, dragging his mom behind him. She was obviously worried about him and fittingly-so pondering what would possess him to eat a whole package of gauze.

As soon as she saw me she said, “his dad left a little while ago. I knew when he saw his suitcase and pillow depart the front door with his dad that Levi would be upset. I was only out of the room for a moment and in that time he had wedged himself between the couch and the love seat and the gauze package was gone. I had just gotten a whole sleeve of gauze and tape from my doctor because my toe is infected. I had just gotten the tape out of his mouth and then the gauze disappeared. I am pretty sure that my other dog didn’t get any.”

All I could do was laugh. And thank the heaven above that Levi found these wonderful people who love him unconditionally no matter how much trouble he gets himself into.

As  Levi’s mom sat in the reception area I gave him a quick exam.

While I was doing that, she told the person sitting next to her the whole sad tale again. All she could do was cover her mouth and laugh.

“Are you going to take an x-ray to see how many are in there?” she asked me.
“We always do a post-op count to make sure that we haven’t left any in a patient at my hospital.”
I could tell by her demeanor and her question that she was a nurse.

“No,” I replied, “it was gauze for her foot and they don’t put the radiopaque marker on bandaging material, just OR gauze.”
“Oh, yeah,” she replied.
“Well are you going to take him to endoscopy for removal?”

“Umm, well, this is veterinary medicine, and endoscopy requires anesthesia, and expensive endoscopy equipment, so no, we aren’t.

Levi’s gauze is coming out the way it went in. the old-fashioned, cheap method of vomiting.”

I asked Levi’s mom if she could stay with us for a while while we tried to get Levi to puke up the goods. She said yes, so off we went to the treatment/surgery area.

In the treatment area I went over the plan with the staff. After each recount of Levi’s story there was laughter. 200 gauze pads, is tragic, AND laughable. That’s our life in the clinic; usually a bit of both tragedy and comedy. If you can’t laugh about it you will burn out. So laugh, its good medicine. 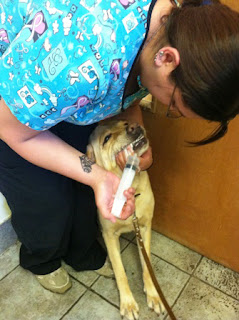 We lined the floor with puppy pads, and started to deliver the first 60 ml dose of hydrogen peroxide.

Within ten minutes we had a pile of white gauze.

The techs counted out 86 on the first vomit pile.

Ten minutes later he got 92 more mls of peroxide, and within 10 minutes had another pile of gauze.

“Oh, Levi, buddy I empathize,” as another pile of gauze was delivered to the puppy pad on the floor, “I’ve been there.”

The third and final hydrogen peroxide dose produced only 16 gauze in a foamy pile of fluid, (the sure sign that the stomach is empty and the gauze was all out of his belly. 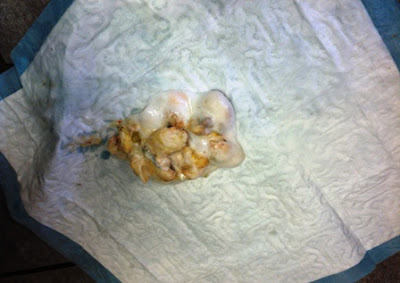 I reminded his mom to not let him eat for at least 3 hours, and sent her on her way with a fresh supply of veterinary gauze and tape. (Had I had any gauze with radiopaque markers I would have sent them.)
I don’t think I will ever understand the reasoning for eating gauze, but Levi has been known to eat socks, and his parents are masters at Levi-proofing their home.

Some dogs sure don’t make it easy.

But as Levi’s mom put it, “I know he’s bad, but he’s a really cute bad. And we love him.”
Levi left with an empty stomach and a long sad face. I think he will forgive us, and I hope I see his happy bouncy face again soon ... just for a “hello” of course.