Last time I introduced you all to Ruger. I told you about the long difficult road it was to finally get him a diagnosis, and then the incredible struggle it was once we got it.

In the end, Ruger died of malignant lymphoma two months after his first sign of illness. 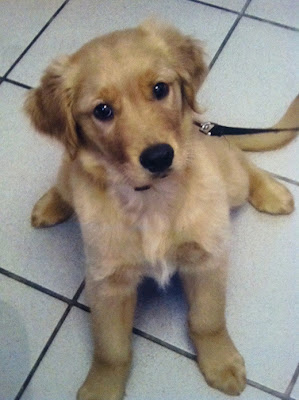 His story was agonizing to watch and heart breaking for his parents. Through it we became friends and allies in a war against the disease in Ruger's body. He was an "incredibly sweet loveable dog, and he can't ever be replaced."

I wished them well, told them to call me anytime, and that they were great parents who had a dog that loved them.

A few weeks later I was elated to see Ruger's dad in the waiting room with a rambunctious bouncing curly locked Golden Retriever puppy.

I was so happy to meet that little boy they named Timber. Timber's dad was all smiles as we smothered that puppy in kisses and compliments. I asked how his wife was doing? He said he had surprised her with the puppy and she was feeling better now that he was in the house.

They were healing and moving on. But they did have lots of questions about whether Timber was a normal puppy.

They just didn't remember Ruger being so energetic when he was Timber's age. I told them that "all puppies are different, and that he did seem a bit more energetic than the average Golden." Secretly, I thought that he was just what they needed. The busie Timber kept them, the less time they would have to mourn. But it was apparent to everyone that they loved this pup to pieces.

At Timber's first visit he was 8 weeks old.

We started him on his first set of puppy vaccines, flea & tick preventative, ran a fecal to check for intestinal worms, and started him on heartworm prevention. We also spent a great deal of time going over our puppy instructions. These help owners understand what we do, what we recommend you do at home, feeding guidelines, and lots of helpful hints.

I saw Timber every three weeks from 8 weeks to 17 weeks old. He grew into a beautiful bouncy adolescent. He was one of the few puppies who was always happy to come in and visit us. Which is quite a big compliment when you are getting multiple vaccines at each visit.

For his last puppy visit, at 17 weeks, I spoke to Timber's dad about what the recommendations for Timber's next few months would be.

I gave Timber his last puppy examination and then vaccinated him for his last puppy distemper combination shot, and his last Lyme disease vaccination. I then asked the technician to bring Timber back to the treatment area so he could have his blood taken for his pre-op neuter check.

Timber was in the back with the technician for about 5 minutes. While they were in the back I stayed in the exam room because I wanted to ask him for his permission to write about Ruger in this blog. He said that it would be fine. Timber was brought back into the exam room as we were talking about the magnificent dog Ruger was.

Out of the corner of my eye I saw Timber squat and urinate on the floor.

I thought that this was odd, he never seemed scared or nervous around any of us before.

Then within 10 seconds his back end went limp and he sort of fell/fainted.

Timber's dad said, "Oh, he must be tired?" But my gut knew better. I lept to the floor, put my hand around his heart, and looked at his gums. His gums were pink, but I'll be damned I couldn't feel a heartbeat. Without any word to his dad I picked up his lifeless 30 pound body and ran through a packed reception/waiting area.

I looked like a t.v. show, and I was wishing that this was one.

I placed Timber on the surgery table, and got my stethoscope on his heart immediately. Nothing. His gums were now purple. I started CPR and swearing. How could I possibly face these owners? God, the devastation of losing Timber would be too much for them. I was thinking all of this and barking orders at my petrified staff.

Within 1 minute we had 2 i.v. catheters in. I had him intubated, and I was shoving massive amounts of life saving heart-starting drugs in his veins.

Yes, a flashback of Pulp Fiction ran through my head. I never stopped the chest compressions and his color very quickly became pink again. Within 3 minutes he had fluids, a drug to increase his heart rate (atropine, see Pulp Fiction) and oxygen. Within 1 minute I felt his heart flutter under my fingers gripping his chest. I was determined and desperately pleading to coax him back to consciousness.

I was continuing his CPR and then his heart stopped again.

I gave a HUGE dose of atropine in his i.v. catheter. It was my last hope and I was losing all hope. Within 30 seconds his heart regained life and started beating fast and furious. Ok, I did get really nervous here. His heart went from zero to 200 beats per minute. But he was alive! Oh! I could breathe again. Within a minute or two he was conscious.

I took a deep breath and walked back to the exam room.

I tried as calmly as I could to explain what had just happened. I brought Timber's dad in the back to sit with Timber so I could keep monitoring him. I begged them to stay another hour, until we closed because I was so afraid I would lose him.

Within 30 minutes that puppy was up and jumping around like nothing had ever happened.

I went home that night feeling as if I had just lived through one of the most scary, nail biting, near death experiences of my career.

Although it has been too long since I ran that pre-op blood work. I bet they are afraid to come back and tempt fate again. I better call them.