And So It Begins Again(?) Our First Health-Related Heart Attack With Cookie

August 27, 2013
We went to meet Cookie on the way to Jasmine's ranch. Since the guys got along very well, we proceeded on our trip with an extra passenger. 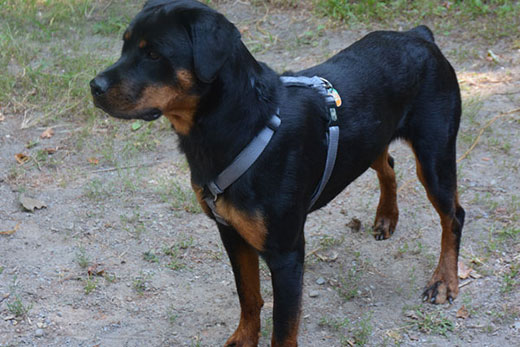 Cookie seemed quite excited about her adventure and not once she looked upset about being taken away from all she knew.

The first day she spent so wound up, she didn't slow down until dinner.

The next day was spent in fun and games, though Cookie didn't mind resting every now and then. The initial excitement wore off a little, it was hot, and she must have been exhausted from the first-day marathon.

The third day started with walks and play and everybody had a great time. Then everybody settled down for a while to cool off.

When Cookie got up she was fully lame on her rear left leg.

She wouldn't put any weight on it at all. Our hearts sank. "You gotta be kidding," we addressed God, omen or destiny, whoever would have been behind this. 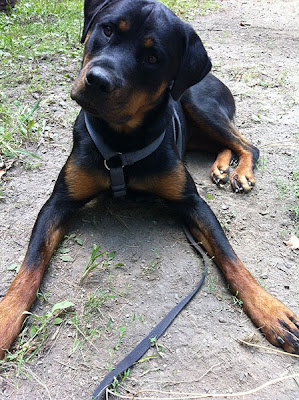 What were we looking at?

It certainly did look way too familiar. It looked very much like a busted knee ligament. But Cookie is young, seemed healthy ... and we didn't get a chance to get her insured yet ...

We examined the leg up and down.

There was some irritation in the foot, otherwise we couldn't put our finger on any other problem. But when Jasmine injured her cruciate, there was no swelling and no pain reaction to palpation we could elicit either.

There WAS the irritation on the foot. Hubby recalled that in the morning as she was running, she stopped suddenly and started fussing with it. Then she resumed play.

But I had a hard time buying that a foot injury, seen only as minor irritation between the pads, could result in such a complete lameness.

I remembered the two tumbles she took when she landed on the deck with more enthusiasm than control. You can imagine how worried I was.

As she remained lame through the day, we decided to cut the trip short, regardless of what this was.

Our house is well-equipped to accommodate a lame dog. And it would be easier to keep her calm, as well as see a vet.

As I was packing up, I remembered that in the morning Cookie came for a visit in the trailer and I found something odd on the blanket. It was snotty, slimy, pouch like thing; but not like any kind of snot I've seen come out of a dog before.

Then I recalled that once I got a wasp sting in my arm and as I instinctively slapped the wasp, similar looking slimy pouch-like thing remained on my arm too.

Perhaps it was a venom sac?

If it was, than I could buy the degree of lameness we were seeing. Hubby though it might have been a sharp weed, but that just wouldn't convince me. A wasp or bee sting would.

We did give Cookie some Benadryl, but it didn't seem to have made much of a difference.

What a start of her new life.

We loaded Cookie into the bus and on the way back home we were.

There we couple things we felt were different between Cookie's and Jasmine's lameness.

They both were fully lame on the leg, with the occasional toe-touch. Those are hallmark symptoms of a busted knee.

However, Cookie didn't seem to have any problems with fully bending and extending the leg; there was no hesitation or resistance there. When sitting, Cookie sat normally, not with the injured leg kicked out to the side like Jasmine would. On the other hand, it seemed that Cookie didn't want to put any pressure on the foot, even when sitting or laying down.

Those signs were somewhat hopeful, as they were different. And then there was the potential finding of the venom sac ...

With our history, though, I wasn't holding my breath. "And so it begins again," I thought to myself with my stomach in knots.

We always thought that Jasmine was jinxed with bad health. What it wasn't her, what if it is us?

Related articles:
From The End Of A Lead Line To Casa Jasmine: Meet Cookie, Our New Adoptee
dog conditions