The Tip Of The Iceberg: The Unexpected Dental Dilemma

Melisa  is a happy effervescent 12 year old spayed Labrador Retriever. She is the beloved pet of two very doting clients that I respect and adore. They love Melissa and care for her better than anyone else I know. 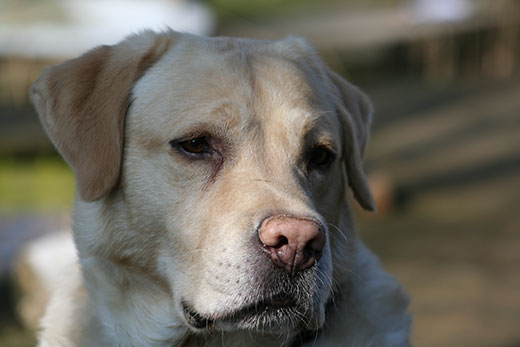 When Melissa came in for her routine annual physical examination I mentioned to the owners that she had two very loose incisors.

Incisors are the small front teeth. They have a single root and are easily extracted. I see many dogs who have gum disease and recession that causes the tooth root to become shallow in the socket. A tooth with a poor socket is a tooth that has a harder and harder time holding onto the mouth. As the roots become more shallow the tooth will loosen. Think of trying to put a fence post in a few inches of ground. Your fence will be much sturdier if that fence post has a deep hole and cement.

When Melissa came to visit me she had her routine normal lipomas (benign fatty tumors) just where they had always been, and a few small teeth that were loose. Because Melissa is older, and so loved by her parents, we had a long honest discussion about what to do with her recent exam findings.

Melissa had one large mass that was about 8 inches in diameter and firm at the base of her right hip. The mass was where it had always been but over the last few months it had gotten harder. I was fairly certain that it was still a lipoma but I was not happy that it had changed its consistency from soft and fluctuant to hard and firm. I was also very concerned about the loose teeth and the gum recession that was about to expose the bone that holds her teeth into her mouth.

Dental disease is the most common disease in pets. It is the most over looked ailment and least treated disease among all pets.

Can you imagine eating with loose teeth, OR, never, (rarely at best in most cases) brushing your teeth?

Routine dental cleanings are recommended by most veterinary dental professionals. A dental cleaning requires general anesthesia, scaling, cleaning, and polishing. The cleaning should also include a full oral cavity examination to include probing all teeth to look for pockets, root exposure, dental radiographs. These are the same standards for people. In general, the smaller dogs tend to need earlier and more frequent dental cleanings, and the larger breeds less often.

But they all need daily brushing.

In Melissa’s case, her family brushed her teeth at least once a week. I applauded them for recognizing that she needed and benefited from brushing but reminded them that studies show that pets benefit from brushing if they receive it more than 4 times a week.

At the conclusion of Melissa’s examination we decided that she was doing so well, appeared to be very healthy, and that she needed to have her dental disease addressed while all of the odds seemed to be in her favor. They wanted to clean her teeth, remove the loose incisors and the lipoma. I agreed and told them that I expected all of this should only take me about a half an hour.

After her full blood work panel came back normal we started her on prophylactic antibiotics and scheduled her for surgery and dental work a few days later.

Melissa arrived tail wagging and excited for the change in routine. 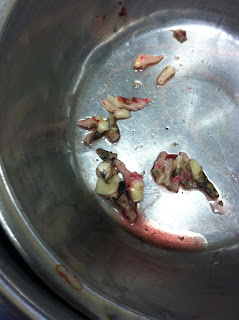 Everything was going routinely until we had her under anesthesia and were able to examine her mouth completely.

Turned out that those two tiny loose incisors were the tip of her terribly diseased dental iceberg.

An hour and a half later we had removed 10 of her teeth. Some of the roots were so diseased that they were like cream cheese to extract.

I called Melissa’s parents and broke the news to them.

Melissa was a lucky girl. She did very well through her surgery, (we took many extra precautions to insure this like i.v. fluids, careful monitoring, pre-op planning, etc), and she has pro-active parents, and now a clean, disease free, mouth.


My lesson learned. I know advise for routine dental cleanings so that we can avoid any icebergs.