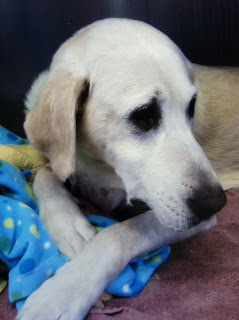 Jake's mom showed up in tears. I had seen Jake a few months ago when they came charging into the clinic with Jake who was blue and suffocating. Jake is an older yellow Lab.

This is most commonly seen in Labrador Retrievers and I see it more commonly in older Labs. It is a terrible and heart breaking disease. It lurks in the dog until without warning that one fateful day arrives.

On that day it attacks the dog’s ability to breathe.


The episodes are brought on by stress, but that stress can be in the form of excitement, fear, anxiety, or really anything. Most owners tell me that one moment their dog seems fine and the next split second they notice that their dog can’t breathe.

If you have ever felt like you are suffocating, or not been able to breathe, then you can identify. It is hell. It is torture.

These poor dogs arrive at the hospital with their head held straight forward, their eyes wide open (fear), and they will not move. They won’t walk, they won’t respond, they just stay completely frozen in fear.

Because when you can’t breathe you don’t care about ANYTHING!

They are an emergency from the first split second they arrive. We bring them immediately to the back treatment area and we give a whopping dose of intravenous valium. I want them sedated ASAP! I give sedation before I place an i.v. catheter. I give sedation before I get permission to give it. I give relief before I think about anything afterward. I sedated Jake with a large amount of valium, and then I went to talk to his moms’.

Within a minute Jake was sleeping and snoring.

Slowly snoring and he was pink again. I sighed with relief for everyone.

I explained to his mom that this disease was progressive and that over time the nerves that control Jake's vocal chords will continue to send fewer and fewer messages to the chords. So the chords open less and less. Over time he'll have to breathe through a narrower and narrower hole in his throat. And as that hole gets narrower the chords hit each other and then start to swell. It is a snowball effect.

The further the snowball rolls down the hill the bigger it gets and the more disastrous it is.

Some lucky dogs start with a small snowflake and a long low grade hill, so they can live years without any real emergencies. Maybe one or two rough sounding panting episodes but no “I’m knocking on deaths door wearing cyanotic (blue) skin.” But the unlucky dogs have episodes more and more frequently triggered by more and more routine things. It becomes torture for everyone involved. The owners don’t want to bring their dogs anywhere, invite anyone over, go for walks, or play, etc. etc.

The only treatment for this condition is surgery.

We sew one of the vocal chords to the wall of the trachea so that the hole is open enough to breathe comfortably and the chords can’t hit each other.

There are a lot of side effects to this surgery. 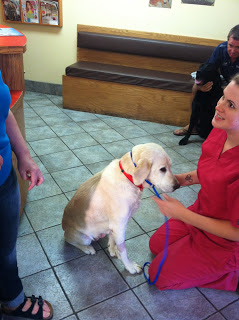 Many dogs with this surgery aspirate. This happens because your throat is sewed open and sometimes you swallow food down the wrong pipe. The consequence of having food in your trachea is that is gets dumped in your lungs. Your lungs are only supposed to have air in them. Once you put fluid, or anything else down in them, they respond by getting inflamed and angry. And a whole new snowball starts forming. This snowball is pneumonia. You really need your lungs to be clear, calm, and only contain air.

After many months of small episodes of breathing difficulty Jake had another disastrous episode.

His mom was here to talk about ending his suffering and putting him down.

She couldn’t bear watching him struggle and was afraid the next episode would be his last. She was petrified that he would die on his way to the emergency clinic and she would be helplessly watching.

I sat down next to her as she sobbed and told me how difficult this was for her. I listened to her tell me about the episodes getting worse and the frequency increasing.

I told her that I understood everything she was saying and that we had to do something for Jake.

I didn’t want him to die during one of these episodes but I knew it was just a matter of time, and probably much sooner than later. I then told her that I was really reluctant to talk to her about this, but we had just done our first tie back surgery a few weeks ago on a dog much like Jake. I told her that this dog was doing incredibly well and that the owner was delighted with the results. I also told her that I knew I was discussing it at a really sensitive time.

I have had this “hail Mary” conversation before with owners when they come into the hospital having made a decision to put their dog down and I offer another option. I have had a few clients start yelling at me. Accusing me of only offering an opinion to make money, or harm their dog, even though I know that I would never offer any opinion that I didn’t think was in the best interest of my patients. It is a sensitive stressful time and there I am throwing a match on the fire.

After I finished explaining the surgery and the outcome of our first, (and last patient), Jake's mom put down her tissue and stopped crying.

I could see by the look in her eye that she wanted a glimmer of hope and I had just delivered it. She said she wanted to go home and talk to her family.

I said “OK, just call me with an answer or bring him in if he has another episode” and she left.

She called the next day and said, “Sign us up as soon as possible.”

The next week we did Jake’s surgery.

He has been a different dog since. His moms say that it was one of the best decisions they ever made. They tell me that he plays and barks, and seems to be happy and calm and young again.

It has been over 6 months since his surgery and he is a marvel.

I adore him and I am so happy his moms are as supportive and invested in his health.