What Is The Right Level Of Paranoia When It Comes To Your Dog's Symptoms? 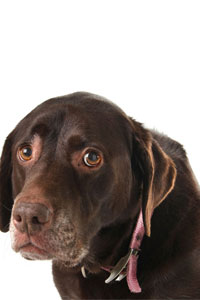 When it comes to your dog's symptoms, how do you know when you're too paranoid and when you're not paranoid enough? That is a question I'm still trying to figure out.

I myself am extremely paranoid as soon as there is anything different about my dog.

Everybody tells me I'm too paranoid. The sad truth is, that it typically turns out that I was paranoid for a reason.

Just recently I had the feeling things weren't right. It was nothing one could put their finger on, just little things that were off. I myself started believing that I was seeing ghosts and convinced myself to take the wait and see approach.

For a whole week I was struggling with it until I finally couldn't take it any more and decided to proceed with testing. As it turned out, Jasmine had a UTI. She had none of the typical signs and the symptoms that were there could have been written off as possible effects of her recent steroid treatment.

Signs of a problem can be very subtle and when your dog is on meds, such as the steroids, how does one tell what is a real problem and what are expected side effects of the treatment?

A dear friend of mine, Roxanne of Champion of My Heart, shares her story in a great article Signs Your Pet May Have an Infection.

It is an extreme example, perhaps, but it illustrates the point really well.

About a year go, Roxanne's Border Collie, Lilly suffered a severe reaction to a rabies vaccination. You can find the full story on Champion of My Heart. To treat the resulting meningoencephalomyelitis and to keep her alive, Lilly was started on a chemo drug protocol last year.

It felt like a reasonable assumption that these new signs were an effect from the new treatment. The rest of Lilly's symptoms were just a different shade of those she already had. It wasn't until five months later, when Lilly suddenly suffered a seizure and began peeing blood when she was diagnosed with a life-threatening bladder infection. All that in spite of frequent veterinary visits.

So how does one know when to worry?

Particularly with a dog who is having all kinds of issues and is on all kinds of treatment, how does one tell things apart?

When Jasmine's appetite declined again, I talk to the vet about it. He thought that perhaps she developed sensitivity to one of her supplements, recommended stripping her diet to bare bones and see where that goes. When I asked how much I should worry about it, he said I had other things to worry about, as presently we're dealing with muscle issues.

Well, I still felt it was something to worry about too.

Then it seemed the appetite changes might have been related to dental problems; there were other signs to support that theory. We scheduled a check-up and potential dental work. While there were some issues with the teeth, they didn't seem major enough to account for what's been happening.

So we're still might be looking at possibility of something more sinister going on, even if just with the mouth.

For no other reason than just because we're going in anyway, I had Jasmine's urine examined again. Well, ok, I had a bit more reason than that. Her last urinalysis, which confirmed that her initial UTI has cleared, had specific gravity that was quite ok but not where it normally is. So again, it was just a gut feeling more than anything.

As it turns out, Jasmine's UTI is back with a vengeance.

No typical signs this time around either.

So what is the right level of paranoid when it comes to your dog's symptoms?

As far as I'm concerned, I came to conclusion that one can never be paranoid enough. My regular reports to her vet always include everything and anything out of the ordinary I observe in Jasmine. We then discuss what could be the reason. Then we start by considering any treatment reactions and flare-ups of existing ongoing issues. But sometimes that doesn't explain things to me well enough.

It's important not to allow a new problem masquerade as an old one.

The problem is that many symptoms one can see in their dog can either be very subtle, or very generic. Most symptoms come with a long list of potential causes, which might include health issues you know your dog already has. If that's the case, it is not the symptoms itself, but the change that is the red flag.

My rule is to KNOW exactly what any change is about.

What do you think? How paranoid should one be?

Related articles:
Signs Your Pet May Have an Infection
Symptoms: Recognition, Acknowledgement And Denial
I Always Thought That A UTI Would Scream It's Presence
dog symptoms