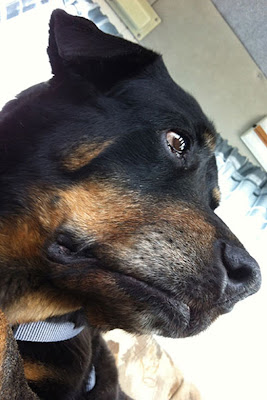 I am not going to get into how terribly hard making the last decision for your dog is. Words cannot describe it. Only those who had to have made such decision can truly appreciate that.

I am merely going to explain the criteria we considered when making the last decision for Jasmine, and really when making any medical decisions for her.

I was going to title this post Making The Ultimate Decision but then I have changed my mind. Why? Because you never know which decisions you make for your dog might in fact be ultimate. The only difference is that with the last one you KNOW it is the ultimate one. Often you can be making one without knowing it.

Example? When she's torn her knee ligament, we were deciding between conservative management, various surgeries and stem cell treatment. Had we gone with the original recommendation of the TPLO, Jasmine's other medical problems, such as her IBD would likely continue to go undiagnosed and Jasmine's life would have likely been quite shorter than it has been.

We did not know then, how crucial that decision actually was.

I believe that choosing the path we did gave Jasmine five more happy years she might not have had otherwise.

Ultimately, every decision you ever make for you dog, inevitably sets the course of the future events.

The food you feed, the vaccines you give, the treatments you choose ... Even if the outcome of such decision can be mended, you are on a path you wouldn't have taken otherwise.

We have always made all decisions for Jasmine, medical or otherwise, only with her best interest in mind.

That part was easy. I KNEW I wanted to do what was best for her. Determining what that actually had often been a challenge. Only the outcome can validate your decisions and then, you still don't always know whether the outcome would have been better had you decided something else. And sometimes, even if the outcome is bad, it might have still been the best decision you could have made with the information you had at the time.

I can tell you I used to sweat every smallest decision I ever made for Jasmine.

I also believe that the decision of treating her neck event with steroids ultimately set the course for the series of events that followed. (I'll get into that in more detail in another post) However, there was no other choice. At the situation as it were, treating with steroids was the only choice that could have been made. Sometimes one has to deal with the biggest problem at hand and let the rest play out as it will.

The point I'm trying to make here is that all any decision might be of the ultimate importance, whether you realize it or not.

It's important not to make any of them lightly.

The main criteria we considered for all decisions on Jasmine's behalf were always about the same, with perhaps one exception.

There were situations when we would have considered her age as a criteria.

Example? She has torn her cruciate ligaments at the age of five. At that time, we have decided surgical repair(s) was the best course of action. Should that have happened recently, we would have likely opted for conservative management instead. Why? Considering her age and expected life span for her breed, we wouldn't have wanted her to spend half a year in rehabilitation from surgery. Rather, we would want a solution that would allow her to enjoy her life without interruptions, such as a brace.

For the final decision we made for her, though, we did not take her age into consideration. We based our decision on two criteria only.

After her drug-induced hyperthermia, Jasmine was suffering at least as bad, if not worse than during her last days.

The situation was different, though. The prognosis was highly positive. We had all reasons to believe that, however great, her suffering was only temporary and she would recover and have her life back. So we decided to fight. I took a month, which to her must have felt like eternity, but she indeed recovered and pulling through the pain got her four more years of full life. It was certainly worth it, and I'm sure she'd agree.

This time, however, her suffering was great and the hope of her making it through all she's been facing was minimal.

The vet said we could hospitalize her, have on on IV and under sedation for 36 hours and see. When I repeatedly asked what the odds were he just wouldn't give me a number but it was clear that the odds were very slim. Jasmine wouldn't have wanted to spend her last 36 hours in the hospital just to be let go at the end anyway.

And even if she did make it through that biggest crisis, she still had the resistant infection to deal with, antibiotics that were taking their toll on her, stomach ulcer and liver that was now shot dealing with all that and not getting a break any time soon.

Her spirit was as bright as ever and wanted to live, her body was in agony.

Thursday afternoon I got hold of our animal communicator. Jasmine's suffering was great, but we knew that. We were told she wasn't quite ready to give up yet but was very close, very tired of fighting …

At that time we still hoped that getting her off all narcotics might turn things around for her.

By Friday morning it was clear that was not going to happen. We were expecting at least some improvement but things were getting worse instead.

I did try to get hold of the animal communicator once again but couldn't. We had a long talk with Jasmine's primary vet about her prognosis.

Her suffering by far outweighed her odds. That were the only two criteria we considered. Yes, she might have hung on for a little longer but to what end?

I wish there was something else we could have done which would have improved the odds. I would have cut off my arm if it was going to help her. I would have given anything to had been able to turn things around for her one more time.

Suffering versus odds. That was the only thing that really mattered.

Based on that, and only that, we did the last loving thing we could have done—set her spirit free from her ailing body.

Jasmine, we miss you!! All things were ever did, including the last one, were out of love for you!