Generally speaking, dogs don’t get nose bleeds as often as people do.

Bumps on the dog nose do very little internal damage, and injury related bleeds are super uncommon. So when a dog’s nose starts dripping blood, there is often cause for concern.

The worst part about nose bleeds in dogs though, isn’t the various and sundry causes (which I will list in a moment) but the fact that your veterinarian rarely has any effective tools to help stop the bleed. 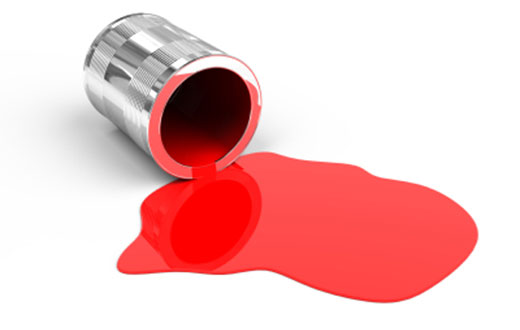 Think about it – with humans, your doctor might tell you to put some pressure on the nose, lean forward a bit, then maybe hold an ice pack over your face for a few minutes until the bleeding stops, right?

With a dog, the moment we start fussing with the nose, trying to stuff things inside the nostril, or holding pressure over the nose, the dog usually freaks out, which makes them throw their head around, which makes the bleeding worse.

So the problem with dog nose bleeds isn’t even just figuring out the cause of the bleed (which is complicated enough!), it’s the damage they do spraying blood everywhere while you’re trying to get the bleeding to stop.

It’s frustrating for the vet and owner, messy as all get out, freaky for the dog… just a nightmare.

Many times the only effective treatment for an ongoing nose bleed is to heavily sedate the dog so that she stops sneezing blood everywhere, giving the poor vessels inside the nose time to clot. And then crossing our fingers that it doesn’t start right up again when she wakes up.

I mean, nobody ever dies of blood loss from a nose bleed, but you wouldn’t know it from the visuals.

Primary differential diagnoses (causes) for epistaxis include clotting problems (any mouse poison ingestion in recent history?), foreign bodies stuck up inside the nose, weird rare fungal infections, severe dental disease / tooth abscess or the worst (and most common) cause of them all, a bleeding tumor.

First-line diagnostics include a full CBC/Chemistry/Thyroid profile, clotting function tests, and often nasal CT or rhinoscopy +/- biopsy. All of which are expensive, time consuming, and the list of differentials is ugly.

All this from a “simple” nose bleed.

Obviously, if your dog has a nose bleed, see your veterinarian immediately.

Greg Magnusson, DVM describes himself as Leo's daddy. Public educator, mender of wounded bodies, healer of troubled souls, veterinarian in Indianapolis at Leo's Pet Care - out to change the world for one little boy...
Contact Dr. Magnusson via his Leo's Pet Care Facebook Fan Page or @IndianapolisVet on twitter.