February 03, 2013
I am glad to say that Jasmine seems to be improving quickly. 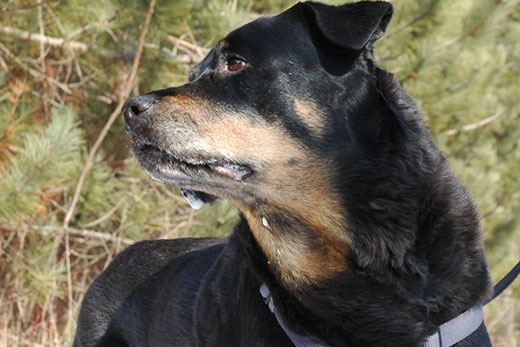 The setback happened on Thursday.

It was around noon. Everything looked OK in the morning. Jasmine went for her morning patrol, enjoyed her breakfast, everything looked just fine. She spent the morning resting, waiting for her afternoon walk. Around noon, she jumped up from her sleep, as she often does.

(I'm not saying that the "jump" was what did it. It's the only thing that would make sense to us, though. But, apparently, for something like this to happen it doesn't not need much at all.)

Then she laid back down but as I looked at her, a red flag popped up in my head.

It seemed she was laying there just as usually but she kept shifting her front right leg. That looked way too familiar, thinking back to the neck incident back in December. I was trying to convince myself that it didn't mean anything, but deep down I knew, it did.

Surely enough, Jasmine got up and it was like a heartbreaking replay of the December situation.

She was walking with her rear end really stiff, thumping hard at the floor. She had her head turned to the left and kept holding it at that position. Please, God, no, may it's not THAT again! But it was clear that it was.

Immediately, I was on the phone with her vet, reporting breathlessly, that we have a repeat of the neck problem.

We still had a couple of the Tramadol left, he said give them both to her. But that was all we had. Hubby was at work and the roads were a mess, and closed due to accidents. How were we going to get the pain meds Jasmine needed?

He suggested we could give her Tylenol instead, but I really didn't feel comfortable with that.

But we needed SOMETHING! Then I recalled, that some time back, when her neck was a suspect behind her episodes, he gave us a prescription for some heavy-duty pain killers to a local pharmacy. We never used them, they expired and we got rid of them. But maybe we could get those this time, instead of the unattainable Tramadol and instead of the Tylenol. 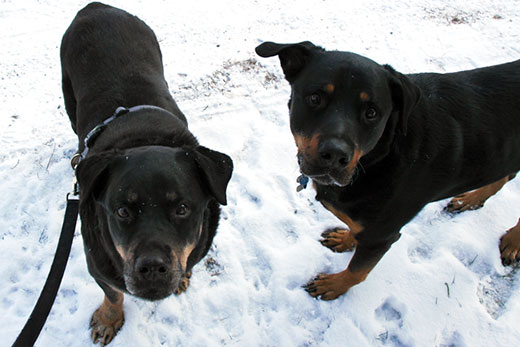 That's what we agreed on and he faxed a prescription for Codeine to our pharmacy.

Next thing to figure out was, whether or not we needed to start her on the Prednisone again. I was really hoping to keep her off it at least long enough to be able to go through with the IV stem cell treatment.

The vet said, that as long as it looked like we can manage with pain control only, we could try without the Prednisone. If there was any foot dragging, or other warning signs, than we'd need to start her on it. At the time of the conversation, what I was seeing COULD have been caused by pain only.

We did have an emergency bottle of Prednisone, so we could start any time we felt we had to.

Jasmine had a really hard time with the rear end, and the front right got thrown into the mix again also. What really scared me was, that she was hardly bearing any weight on her hind left, and when she was standing the rear left foot remained "folded", meaning the toes were together instead of spread out on the floor as in an normal stance.

Not as in knuckling; imagine trying to hold liquid in your hand--that kind of thing.

Could it have been simply because she was not putting weight on that leg? Or was it neurological?

The vet had gone home for the day and it became our call. Hubby did come home by then, and we both agreed that we didn't like the look of that.

We decided not to take any chances and start the Prednisone after all.

Whether it was because I was able to start the pain meds so soon, or because this time there wasn't the additional trauma of a long trip to the vet and back, or because the neck wasn't in as bad of a shape as last time, Jasmine was able to rest for most part.

In December, she just stood there, unable to lay down comfortably. She would cry every time she tried. This time, thankfully, while in pain and obviously miserable, at least she was able to lay down and sleep for a good deal of the time.

When she did get up, though, she had a really hard time.

So yet again, we all slept in the kitchen with her. Well, they slept, I just laid there, watching her and worrying.

By the next morning, though, Friday, she had improved quite a bit.

Her rear end was still stiff but nowhere as bad, her feet all looked fairly solid on the ground and she seemed to have been in much less discomfort.

In the afternoon, she walked almost normally, and was already full of beans and wanting to go for her walk.

She has little understanding for the fact that just because she FEELS well enough, it doesn't mean she IS well enough. One of the side effects of the pain meds is supposed to be sedation. Really? The one time we would actually WANT a side effect, it was not meant to happen.

By Saturday, Jasmine looked quite good. So we are so thankful for that.

A bunch of questions remains
I was able to find a hospital in town (Jasmine's old hospital, as it turns out) that now has a fully equipped rehab center and laser treatments.

Jasmine's vet sent referral forms and we can start with intensive laser therapy there, as soon as it looks that Jasmine is ready for the trips.

We will keep up the acupuncture and everything else we've been doing. If we get so lucky to have Jasmine off the Prednisone for 45 days, we will try the IV stem cells. That's not going to happen any time soon, because right now we're back to the original protocol we did back in December.

I wish we can get Jasmine's body working for her yet again, so she can get back to the life she loves.

She is NOT happy being under house arrest AGAIN. But she seems to be feeling and looking good, so that's something.

I pray we can get things turned around for her and have not a repeat of this ever again.

She is on high dose Prednisone!

That seems to finally conclusively rule out allergies as the cause behind those episodes. Jasmine's vet said that even quarter Prednisone, the dose she was on the last time she had an episode before this one, should have been enough to prevent allergies from causing such trouble. Well, she's not on a whole one!

No, I am not really glad for that.

Because that might mean that the episodes might have been neck-related the entire time (ever since she was about two years old!). But the truth is, that we never felt it could have been allergies. I just was not adding up with what we were seeing.

Could it be something else all together? Everything else seems fine. We discussed potential hormone issues, but the vet said that after all this time those would have to have shown up some place (bloodwork, liver and other organ function ...) Which makes sense to me.

But it makes sense to deal with problems in order of severity.

If we can get the neck back to the shape it was at before last December, than we can worry about other stuff.