What Is Xylitol Poisoning in Dogs? Ask Boomer! 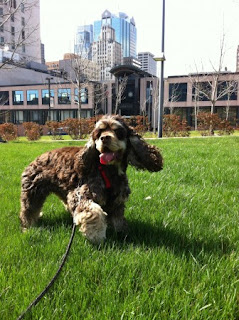 Boomer is a dog who gets into things and eats items he shouldn’t.

He is one of those dogs who dog mom Angela Kussman says is “too smart for his own good.” He opens doors and drawers by himself, pulls things off counters, and nothing lower than 5 feet is safe from Boomer.

Xylitol poisoning is not something Kussman ever knew about.

As the parent to a dog who likes to McGyver his way into situations, I have learned not to leave treats within Dexter’s reach and to keep purses zipped and up high from prying Cocker eyes and paws.

Kussman can relate and she hopes her recent near tragedy helps other dog moms and dads.

“I had a friend in town for the weekend and we went out to dinner and the symphony to celebrate me buying a new house and her accepting a new job and moving to Kansas City,”  Kussman shares. “We were gone about 5 hours and I decided (stupidly) that I would just let Boomer stay out and be free while we were gone.”

What could he possibly do in a few hours, Kussman thought to herself.

After all, she put everything out of his reach.

When she arrived home at 10:30 that night, she saw remnants of something all over the floor. Boomer had broken into two containers of Ice Breakers Ice Cube gum she bought earlier that day and broke the plastic to get the gum out. The gum was left on the kitchen island in a bag from the store.

Boomer had vomited and began drinking massive amounts of water.

He kept begging Kussman for water and kicking his bowls around. Something made the worried dog mom Google “My dog ate Ice Breakers gum.” What she read shook her to the core and caused her to rush Boomer to the emergency vet. 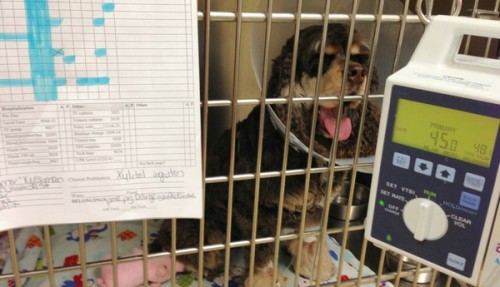 Xylitol is one of the ingredients in Ice Breakers (and other sugar-free) products.

The vet explained to Kussman that even a small amount can be lethal, and having ingested 40 pieces, the prognosis was very serious. The Xylitol had time to travel to Boomer’s liver and he was in danger of liver failure.

The prognosis was downgraded to poor.

“She had him on an IV solution with glucose to try to even out his glucose levels and a liver protectant,” Kussman recalls. “ She also said they needed to do a plasma transfusion to improve his clotting time.”

He began with Vitamin K injections, a glucose solution, and a liver protecting drug. They wanted to flush his system out and hope the liver could start healing itself. Boomer was hospitalized from Thursday through Monday and began to show improvement.

Three nights of treatment cost Kussman over $2,500 and she nearly lost her dog to Xylitol poisoning. 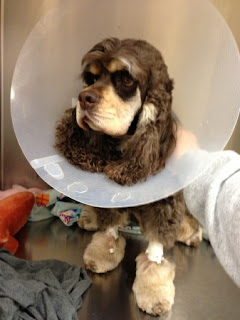 “Everyone knows chocolate, grapes, raisins, etc. are toxic to dogs.  Why don’t we know about Xylitol,” she wonders. “ I vaguely remember hearing the word, but never knew what it was in.

PetMD has an article about Xylitol toxicity, which we encourage all pet parents to read.

As for Kussman, her dog’s veterinarian shared that there has been a huge increase in Xylitol ingestion over the past year at their practice.

What can you do to prevent Xylitol poisoning in your dog?

Boomer was able to celebrate the holidays with his family.

He has to have his liver checked every two weeks, with the hope that it will start healing itself and return to 100 percent functionality. He is not quite 4 years old, so both Kussman and the veterinarian are hopeful. 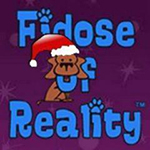 “A dog lover of the highest order,” is how Gayle King introduced Carol Bryant when she and her Cocker Spaniel appeared on Oprah Radio’s Gayle King show to dish dogs. A frequent media contributor, Carol has appeared on television, radio, and in print.

As guest speaker at conferences and seminars about dog products and travel, she also has a passion for growing social media and helped one client land the “best dog blog” honor. A repeat nominee from the Dog Writers Association of America and writer for Dogster, she also works with BlogPaws pet blogger social media community and conferences and is founder of her own canine-centric magazine-style dog blog, Fidose of Reality.

Fidose of Reality is a canine-centric online magazine-style blog where dog lovers of the highest order unite.

From dog news to dog travels, the latest in canine health and wellness, dog fashion and finds, and haute pet products for cool dogs, Fidose of Reality covers it. Coupling our 20 years of dog travel with a passion and penchant for pet products, our hearts beat dog.