The data has been compiled. I went through our patients over the last ten years who are over the age of three years old. A summary of the data shows that while 2.1% of our spayed and neutered patients had to undergo ACL surgery, only 0.3% of the intact animals had to have the surgery. 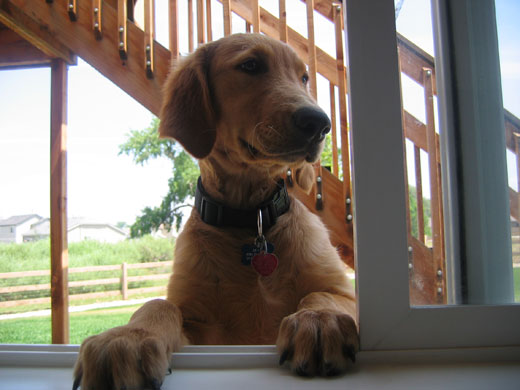 This represents a seven-fold increase for animals that have been spayed and neutered before the age of 6 months to have to undergo knee surgery for anterior cruciate rupture.

These results are staggering (so much so that I am submitting these results for publication…if we are published I will post the article and everyone can see the specifics of the study…don't want to get too technical here).  In pouring through the archived studies there does seem to be a possible explanation.

A study of 1444 Golden Retrievers performed in 1998 and 1999 found that animals spayed and neutered at less then a year of age were significantly taller than those spayed or neutered at more then a year.

The sex hormones, by communicating with a number of other growth-related hormones, promote the closure of growth plates at puberty, so bones of neutered or spayed animals continue to grow longer.  These dogs have longer limbs, lighter bone structure, narrow chests and narrow skulls.

This delay of growth plate closure can result in different angles from one set of long bones to another.

For example, a study  by Dr. Kathy Linn and her resident Dr. Felix Duerr showed that spayed and female animals have a significantly greater tibial plateau angle. This is because the tibial growth plate stays open longer then it is supposed to and the tibia continues to grow longer relative to the femur in “fixed” animals as opposed to those animals who are intact.  It is widely known and accepted that animals with a greater tibial plateau angle are at a much higher risk for anterior cruciate injury.  Perhaps Dr. Michael will delve into this on later posts.

It is these changes in bone structure then that subject prepubertally spayed and neutered animals to anterior cruciate rupture.

The increased risk of anterior cruciate rupture and surgery is just one more reason to think strongly about whether we should be spaying and neutering our pets….particularly before puberty and before normal growth has finished.


Related articles:
Compensation: An Attempt To Restore Harmony
How The Oddysey Started: Jasmine's ACL Injury
Talk To Me About ACL Injuries
Newest Surgery For Ruptured ACL In Dogs
Preventing ACL Injuries In Dogs
ACL Injuries In Dogs: Xena's Story
ACL Injury Conservative Management: Sandy's Story
Surviving The Post-Op: After Your Dog's ACL Surgery
Talk to Me About Arthritis
Don't Forget the Physical Therapy
My Love Is Sleeping At My Feet: ACL Surgery Complications
Coco's TPLO Post-Op Diary
Small Breeds Can Hurt Their ACL Too: Star's Naughty Knee
One Thing Leads To Another: Why The Second ACL Often Goes Too
ACL/CCL Injuries In Dogs: Is There Such a Thing As A False Positive Drawer Sign?
Dog Knee Injuries: Should You Say Yes To Pain Management?
Knee Surgery Post-Op Helper: Bottom's Up Leash
knee injuries