The Story Of Flossy And The Mystery Vomiting

It all started one morning when my husband gave Flossy, our 2-year-old border collie, a small piece of toast.

No sooner had it been swallowed, she has brought it back up. No retching, just straight up. During the night, she was lying on her bed and the poor love didn’t have time to even stand up, she was sick on her bed, mostly water. 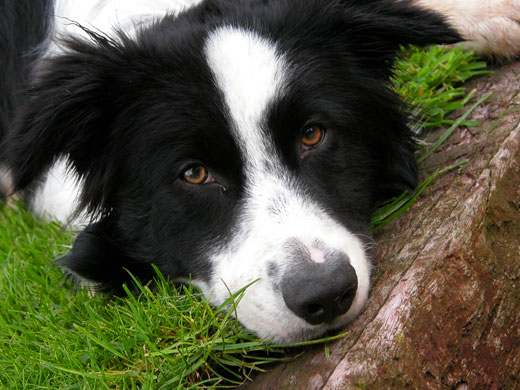 I looked at the calendar and worked out that it was 3 months since the end of her season and I put it down to the beginnings of a phantom pregnancy – after all, she had been a little unwell last time (going out to eat grass and be sick). I took her to the vets where they prescribed special food, antibiotics, and probiotics and to monitor her.

So, it went on for a few days, being sick, usually water, during the night and in the morning.

I then started getting worried about possible pyometra, because she also had a clear discharge from her lady bits. But I had been giving her raspberry leaf tablets for the duration of her season and beyond, she was young and fit and ate raw.

How could this be?

I was on the way to meet a friend and Flossy again was sick in the car, just water. I thought at first it was the movement of the car, and her hormones again. But I needed to know for sure so I had an emergency appointment at the vet where they undertook an ultrasound on her. Nothing was found (the vet thought she saw something but could not then find again it to mark it) and her blood results were all normal. We went away with the advice to wait for the hormones to settle.

The sickness continued and Flossy was losing weight.

She would keep food down, however, water could be heard sloshing around in her stomach after she drank and she'd become nervous of drinking because a short while afterward, she would have to run outside and it would come back up again.

Meanwhile, she was going through all the normal signs of a phantom pregnancy – collecting toys, nesting, and whining. I really wanted to press the vet for an x-ray but didn’t. Time elapsed: about 2 and half weeks.

After noticing that Flossy wasn’t actually being sick but hearing and seeing the water just pouring out her mouth by this stage, I became convinced she had megaesophagus and I made an appointment at the vets (again).

This time, I pressed for an x-ray and I left her there, fearing the worse.

The vet was very surprised when he called – he said her x-ray showed a round ball about 2 inches in diameter, clearly visible in her stomach.

I could not believe what I was hearing.

Now, looking back, I know exactly what had happened. Flossy likes to grab toys and wrench them around in her mouth, as our other dog is playing. She must have picked up my husband’s squash ball and swallowed it as it became slippery with saliva.

The vet said that Flossy did not show the typical signs of a gastric obstruction and that is why we were not focusing on this at all.

The vet said there would have been no way she could have brought that ball up or for it to pass – that it was acting like a valve in her stomach. Total vet visits: 3

My choices that day were to have that vet remove the ball asap by opening her up – or my thought was to contact the local specialist vets who carry out the endoscopic removal of foreign objects. £800 v £1600 approximately.

The specialist practice wasn’t overly helpful – mostly due to an unhelpful receptionist and the fact that they stated this type of obstruction was not an emergency and I had to wait for 4 days. I was advised by the normal vet that the risk of removing a ball endoscopically was that it could get stuck in the esophagus - a much more serious condition.

I made the decision to have the ball removed the following day because, by the time, I had gained approval for the specialist to talk to me (through referral), the time had been lost and the vet had to go back into his afternoon consulting.

The squash ball had roughened and the yellow dots had almost worn away.

I have no idea how long it had been there before causing her an issue. Not long I hope. I worried about the chemicals used in the production of the ball. Interestingly, days previously, when I thought the problem was hormone-related, I had my friend over to do a zoopharmacognosy session (a process by which animals self-medicate, by selecting and using plants, soils, and insects) with her and she ate loads and loads spirulina – was this her way of trying to deal with the ball in her system?

The incision was long and the operation is a large one and Flossy had to do lead walks and rest for 10 days.

She was healing well and the vet was pleased.

I have now removed any ball from being freely available. I feel so bad that Flossy had to go through this, completely our fault – and all along we were concentrating on the wrong cause.

Only the x-ray solved the mystery and, with the beauty of hindsight, I should have pressed for an x-ray earlier.