October 20, 2012
Feeding Jasmine home-cooked diet, one of the things I always regretted was that I could not include bones in her food.

Yes, we use a mineral supplement, but I always thought I'd feel better being able to include actual bones. 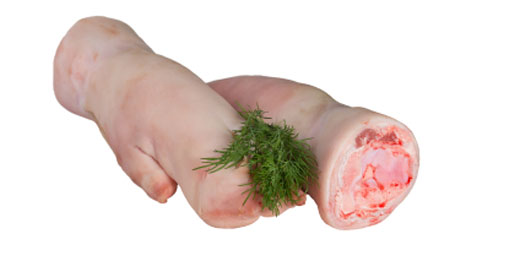 Feeding your dog cooked bones is a big NO.

Just recently I found a tip at Dog Dish Diet, which got my attention. (Actually, I saw a video too, which I now cannot find)

Dr. Greg uses chicken or pigs feet, with the premise that after enough slow cooking the bones become tender and chewable, thus don't splinter or pose any other danger. Could that be?

I thought back to the days in my old country. Carp is a popular fish but it's full of annoying little bones. I remember that some fishermen were able to cook it in such a way that the bones became tender and there was no need to worry about them anymore. (Of course, it was their trade secret which they wouldn't share)

Then I thought of canned fish, which often has bones in it, which are also tender, easily chewable, and no threat.

As soon as we were able to get our hands on some pork feet, I decided to try it. Yes, you have to cook the living daylights out of it (about 20 hours on high; until they're soft and crumbly ), but it works! I am very excited about it.

(Of course, paranoid as I am, I decided to grind them up into a paste before offering them to my dogs.)

What a treat though!

It has the bones, bone marrow, all the cartilage, and other connective tissue ... Our guys are crazy about it! Not sure whether it's because they know it's good for them or because it's something new, but, either way, they think it's awesome.

And I do feel better.

Very happy that I can supplement their diet with some new goodies. The only thing to watch is that you don't give too much because it could cause constipation.