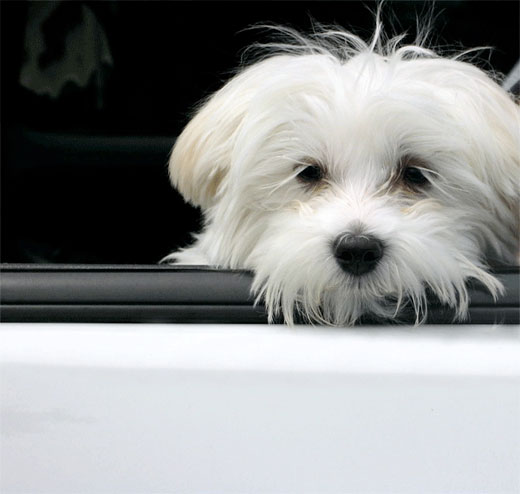 He was not acting like himself for a couple days, then he stopped eating, and was very warm.

We took him to the vet the next morning. They suspected IMHA and started him on prednisone, while we waited for the labs to come back. The labs confirmed the IMHA and we admitted him to a hospital with an autoimmune specialist. After six days in the hospital, three blood transfusions, daily acupuncture, and daily cocktails of prednisone, cyclosporine, and lefluedomide, they were able to get the IMHA under control and released him.

It has been almost 4 months and he has been off medication for 7 weeks now and is back to his spunky, playful self.

There were so many times during the treatment we thought we were going to lose him and were wondering if it was best for him to continue treatment. We are so grateful to his doctors and the staff at the hospital that told us to hang in there and give the medications a chance to work.

She had been fine the night before, running around with her 2 sisters. It was 7:30 in the morning and I had taken them out. Upon coming in she didn't want to eat she just sat and looked dazed.

Then she collapsed and cried at which point I rushed to the vets.

My vet was not in but another vet checked her and said when he listened to her lungs it sounded like she had a little fluid on them and also a heart murmur which she hadn't had before.

He told me we should wait until the following Tuesday and gave us some fluids pills.

He also said, that if she had another episode to bring her back.

When I got her home she slept for a while and then almost seemed like she was having a seizure.

I returned to the vet at which time he took a chest x-ray. Again we returned home. Bridgette slept for a while and then started throwing up. It was now late Saturday afternoon and I had to call the vet as they were closed. He said he'd meet me there.

It was 4:30 PM the day before Easter that I kissed my sweet precious Bridgette goodbye.

They wanted to keep her and watch her.

They called later that night, that they thought it was IMHA.

Bridgette was given large doses of prednisone and a transfusion. On Easter, they said that she was holding her own but her red blood cell count was very low.

Easter Monday morning I was hurrying to get ready to go to the clinic to see her as it was again open and I received a call that Bridgette had passed away.

It was the worst day of my life. I hope no one has to go through it. I wasn't even aware that IMHA even existed. 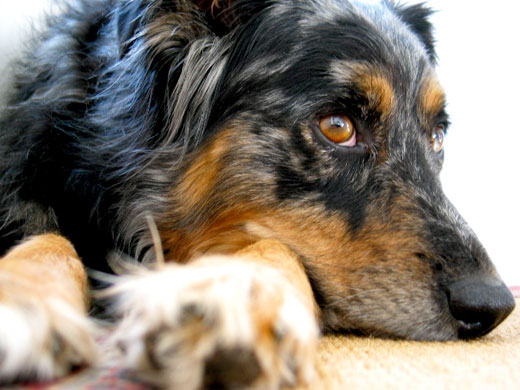 We lost our Australian Shepherd, Bonnie, to IMHA complications.

Like everyone else here, we never heard of the disease until April 28th. Bonnie survived the initial event and was put on prednisone and immunosuppressants, but died from a horrible internal fungal infection.

The infection wasn't diagnosed until it spread to her spinal cord and she couldn't walk.

We had to let her go when it moved into her lungs. .

She was a rescue who entered our home over 9 yrs ago and declared that she was alpha female to our little family of dogs and cats. Except for needing thyroid meds, she was healthy for her age.

We took her to the vet immediately, after blood tests, she was diagnosed with IMHA.

First time I heard of it.

Our vet started meds and was optimistic. Had a good night, was tired but good. Went back to vet for a blood test and slightly worse, but still ok. Next day was weaker, started new meds, but alert lost appetite late in the day. That night she would only lay still and watch us or sleep. Then very late breathing became labored, we knew she was leaving us.

Called vet who met us at the animal hospital, but she died before we got there.

Three days is all it took for this horrible illness to take our baby.

It is so comforting to read other stories.

And yet I still don't know if I did the right thing for my baby girl.

Her name was Tinkerbell 5years old rat terrier she was so fun and sweet and she loved me and much as I will always love her.

She was fine one day - playing, chasing her tail - and the next, not eating, sleeping constantly, her gums where white I knew this wasn't good.

I took her to the vet the next day, her counts were at 25. She was put on prednisone. Next day she was worse (15). They doubled her meds and gave her IV and was to bring her back in the morning.

By then her counts dropped down to 10 and they said she needed a blood transfusion.

I was not going to make her suffer anymore. She couldn't even hold her head up and her eyes were just glazed.  I couldn't put her through that.

I will always love her and miss her. 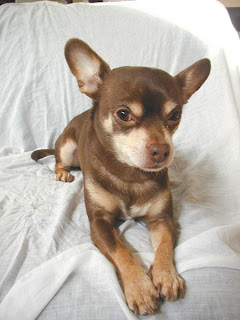 I too have a Chihuahua who has IMHA. I have never heard of this awful disease before and have had pets all my life.

I went to work and all was well. When I got home, Hayley did not act like herself. I do not know why but picked her up to look at her gums, which were very pale...

Off to the vet where we were told of this awful disease.

Hayley was sent to the critical care animal hospital where she had a transfusion and IV and they put on her meds. She has done very well from get-go.

After the 4 hours of the transfusion, Hayley wanted to eat and drink.

She started having wasting from the prednisone... so cut the dose and she is more like herself now. Her count went up from 8 to  24 after the transfusion, and the next day it was 25.

Now, after 4 weeks it is 40. We are going to send her to physical therapy with a laser so she can regain her muscle.

We are not out of the woods.

Many things can happen with IMHA. It is very scary and we feel it was her shots. She had such a bad reaction she has a waver on all shots.