Breaking The Bad News When It Could Be Something Else: Penny Does Not Have Cancer

September 25, 2012
Recently I received a distressed email from a friend, regarding her dog. 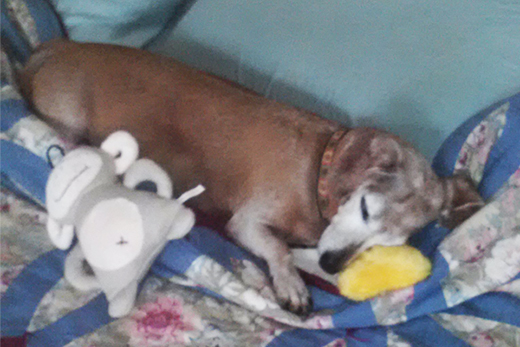 I wanted to reach out to you and tell you that my dog Penny is very sick and in the hospital.  She has had bouts of colitis and lethargy. The last few days very lethargic, suffered with bowel trouble and fever. The hospital discovered prominent lymph nodes and some abnormal results on the ultrasound and chest x-ray.

They aspirated lymph cells, and it looks inconclusive, so sending out to a pathology lab.They think she may have lymphoma!  I am a wreck.  Just asking you to please pray for her and for me and my husband as we love her so dearly.


What do you answer to such a heartbreaking email? What words could possibly make things better?

We were on the receiving end of such possibility twice with Jasmine. I know exactly how it feels.

The first time, Jasmine was still quite young, about 5-years old, when she suddenly developed a cough. She did a lot of barking that evening because neighbors had a loud party in the backyard, so initially we figured she just irritated her throat with that. But it was not going away. Kennel cough didn't seem likely, as Jasmine was not boarded or exposed to any environment crowded with dogs.

The next day, she was still coughing.

We took her to the vet that afternoon. He checked her out, discovered she had elevated temperature and enlarged lymph nodes. She was a good girl and demonstrated her cough too.

The vet turned to us and said like if it was all the same, “it's either infection or lymphoma. We could start antibiotics and see if the problem resolves.”

Either infection or what? My heart jumped into my throat.

I didn't know much about veterinary stuff then, but I knew what lymphoma meant... Jasmine's best buddy died to it. Trying the antibiotics made sense, so that's what we agreed to. But the word lymphoma lingered in the air.

Fortunately, the cough resolved very quickly with the antibiotics and, on the follow up exam, everything looked good.

Could I have lived without the “L” word being tossed around during the initial visit? I wouldn't have spent a night tossing and turning, that's for sure.

That was certainly the case the second time we had to face the possibility of the big “C”.

After Jasmine was diagnosed with a torn cruciate ligament, hubby dropped her off at her then new vet's to get more x-rays. While she was under, the vet decided to give her a good look over. And then we received the phone call, “I was palpating her abdomen and I felt a mass. Would you agree to taking additional x-rays of the abdomen.” We, of course, agreed.

And then we got called to his office.

My knees were buckling underneath me.

Not only the mass could be felt, but it also showed up on the x-rays. Also both Jasmine's spleen and liver were enlarged. The vet recommended starting with a blood test, and if negative for cancer markers, exploratory surgery to see what it is and, if possible, get it out.

Wasn't it enough that Jasmine had a bum knee? The whole time we were trying to figure out what to do with that, and now, it might not even matter?

When we took her for a walk that afternoon, the ground was covered with fresh snow. Jasmine adores snow and she wanted to run around in it and dive into it … but we couldn't let her because of her bad knee.


We took a camera with us to take what, potentially, could be the last happy photos …

I was looking into here eyes, full of fire, and I could not accept that she might be THAT ill. It didn't make any sense. She had so much life in her!

Fortunately, the blood test came back negative. It didn't mean it could not be the big “C”, but it meant that it was not likely and that the exploratory surgery was on.

The exploratory surgery revealed that the mass was not an actual defined mass, but rather thickening of part of the stomach and small intestine. The vet did a biopsy and sent it out to the lab.

Eosinophilic gastroenteritis isn't exactly a good news, but it certainly was to us! Heart wrenching week took good couple of years of our lifespan. But Jasmine was going to be OK!

I really didn't know what to respond to my friend, except of words of support, so I asked further questions instead. If it wasn't the big “C” either time with Jasmine, maybe this isn't?

I knew it was grasping at straws, but maybe, if we can come up with another possibility, it will make it so.

I asked about the lymph nodes and whether spleen was enlarged also.

Yes, all the lymph nodes were involved and spleen was enlarged on ultrasound. However, Penny also showed positive for Lyme exposure, and she was started on doxycycline for that. They were waiting for C6 Lyme quantitative test and the cytology results to come back. 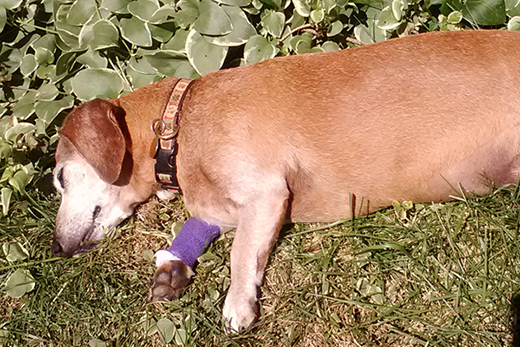 Meanwhile, I dug out all the info I had about the latest and greatest lymphoma treatments.

But perhaps it really is just some systemic infection?

Given the signs, it was a long shot, but it was not impossible.

Penny seemed to be doing a bit better on the antibiotics and was able to go home from the hospital. She was still weak and coughing badly. But she started eating.

I was turning the internet upside down trying to find some confirmation that all this could indeed be from a systemic infection. There was some chance that it could be ...

Finally they got the cytology report.

It came back reactive to infection and negative for lymphoma!

It wasn't clear what infection it was, probably tick-borne, but the important thing was that Penny was responding very fast to the doxycycline. Even the cough had somewhat improved.

Today, Penny is doing well. She is back to her full self, active and with a good appetite.

On her last re-check at the internal medicine vet, all looked good.

All good decisions need to be based on good information. Being well-informed is crucial. But sometimes I wonder, how much do we REALLY need to know, particularly when it could be something else?

Sometimes I yearn for the days of blissful ignorance.

When we were discussing this, my friend asked me a valid question, "Why couldn't they have just started the antibiotics before looking for the worst case scenario?" Wouldn't that be the kinder and better approach?

I certainly would have been happier if I've never heard the "C" word and Jasmine's name in the same sentence.

The truth is, that with Penny's presentation, the odds that those symptoms and signs could add up to lymphoma were quite high. This would make considering that possibility the diligent and responsible thing to do. How mad would one be, if they just started the antibiotics, the dog kept getting worse, and it turned out that precious time got wasted?

Sometimes the only choice is to consider all scenarios, no matter how painful, just to cover all the bases.

A friend's sister died just recently, to advanced cancer in her lung. It started in her shoulder. She was seeing doctors with her shoulder for a long time and nobody caught it, until it got into her lung and it was too late.

What do you think?