Symptoms To Watch For In Your Dog: What Can Your Dog's Gums And Tongue Tell You?

July 21, 2012
In Traditional Chinese Veterinary Medicine, the tongue provides a wealth of information about a dog's health status. This is called a tongue diagnosis and it is quite fascinating. I am not going to get into that today, though.


Today I want to talk about some vital, basic information you can gain from observing your dog's gums and tongue. 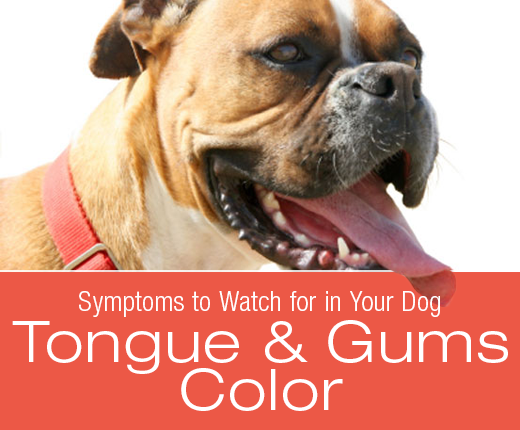 Particularly during hot summer months I like to pay close attention to the color of my dogs' mucous membranes.

Make no mistake, heat stroke is a deadly summer danger.

As soon as my dogs' tongue and gums start getting deeper pink in color, it is a signal to me that it is time to take a break and cool down. I am very paranoid about this and watch closely to register even subtle changes.

As the dog's body gets hotter, the pink gets progressively darker.

Eventually it may turn brick red or even purple or blue (as oxygen saturation declines), but these are signs of an emergency and you don't want to let things get that far.

Another sign that your dog is getting too hot is increased panting. I noticed that even with seemingly typical panting (as in play), when my guys are getting warmer, they hold their tongues out further and wider than usually. That again is a sign to me that it's time to take a break and cool down.

At early stages these changes can be fairly subtle but I like to take precautions sooner rather than later. During a walk on a hot day—we do go out either in the morning or evening but even then the temperatures can be pretty high—I will stare at Jasmine's tongue and gums constantly, often tripping and stumbling over things, that's how important this is to me.

I always carry plenty of water, not only for drinking, but enough to be able to wet my guys down if necessary.

Tongues that are even a couple of shades darker than normal are enough for me to take action.

Only once, a couple of years back, Jasmine's tongue and gums started turning red on the drive home, and it almost threw me into a panic. Fortunately, getting her to drink a bunch of water and wetting her body was enough to cool her down and nothing bad came from it.

Jasmine did once suffer severe effects from hyperthermia—it was a drug-induced hyperthermia—and the outcome was quite devastating.

Don't ever underestimate the damage heat stroke can cause to your dog's body.

Pay attention and don't wait for further symptoms to develop.

There are other serious conditions that can cause your dog's mucous membranes change from their normal appearance.

It is always important to consider circumstances and accompanying symptoms.

Blue or purple membranes indicate a lack of oxygen, which can be caused by heart failure, poisonings, or respiratory problems.

Pale, gray or white membranes can be sign of anemia, shock, blood loss or, severe dehydration, and more.

All of these changes indicate serious medical conditions which require immediate veterinary attention.

Other things you can check by examining your dog's gums are capillary refill time and level of dehydration/hydration status.

Dry, sticky gums are a sign of dehydration. This is particularly important when your dog is suffering from vomiting or diarrhea or has stopped eating or drinking.

Slow capillary refill time is another sign of a critical illness. To check this, press a finger firmly on the dog’s gums for about three seconds. The area you pressed on will be paler than the surrounding tissue. The color should return to normal in about one and a half seconds. If it takes longer than that,it could be a sign of low blood pressure  or poor circulation (e.g., from heart disease or dehydration), another indication that your dog is really sick.

It is important that you know what is the normal color of your dog's tongue and gums is and pay attention to any changes.

While looking at your dog’s oral mucous membranes you might see red and swollen gums from bacterial infection, such as gingivitis. White spots can mean oral thrush – a fungal infection. Any new lumps, bumps, growths or local discolorations, particularly darkly pigmented areas, of the mouth, tongue and gums should also be examined by your veterinarian.

When was the last time you took a good look at your dog's mouth?

Signs, Symptoms And Treatment Of Heat Stroke In Dogs
Know Your Dog's Enemies: Heat Stroke Is No Light Matter!
Heat Stroke: What Happens In The Dog's Body?