When It's Looks Too Good To Be True … The Lameness Returns

May 12, 2012
Last week Jasmine suddenly started limping on her front left leg terribly. It was such a shock. She was doing so poorly that I was worried that she was going to hurt something else in the process. A physical exam led to a decision to do a stem cell treatment as soon as possible.

That was Thursday of the last week. The treatment was planned for Wednesday of this week. 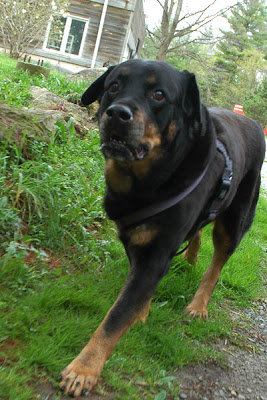 Then, as suddenly as it came, the lameness disappeared.

It already looked better on Friday, and during the weekend the lameness was completely gone. Could it be that it was just something minor and two days of rest were enough for it to resolve? It surely didn't look minor when it happened. It didn't look minor to her vet the next morning either. On the other hand, there was no sign of a problem anymore. Should we cancel the treatment?

After a long discussion with Jasmine's vet, it was decided to put the treatment on hold.

I was very conflicted about this. I certainly didn't want to put Jasmine through anesthesia when I didn't need to, but I was worried that if we cancel the treatment the problem will come back with a vengeance. You know, it was one of those things that just looked too good to be true … Plus this was Jasmine—Jasmine doesn't do simple problems that quickly resolve on their own. It was very baffling to me.

Either way, the decision has been made and I was just sitting there, waiting for disaster to strike.

Through  Monday, things still looked good. Perhaps I was just being too paranoid?

Surely enough, on Tuesday night, the night before the day of the now-canceled treatment, the lameness returned. Figures! It wasn't anywhere near as bad as originally, but it was back.

We had canceled the treatment but kept the appointmen, because I wanted her vet to check her out to see what he makes of such sudden recovery.

But now we were some place else again.

He was checking her out thoroughly, and for a long time. He felt that the character of the lameness had changed. There was more resistance to flexion and this time he felt a grind. This was also confusing, since the first time it looked really bad, while this time it felt much worse.

It was time to get x-rays to get a better picture and rule out bone fragment(s), as now that seemed to be the likely root of the problem.

The radiology appointment was made for Friday. We were prepared for the possibility that Jasmine might need arthroscopy to get that fixed.

Jasmine, as always, was very excited to go to see her vet again. She just loves the guy. She wasn't, however, very impressed when hubby handed her leash over to him and turned to leave the room. “Hey, wait, where are you going? This is not how it's done! We come here, visit, and go home. You don't leave me here (again)!” 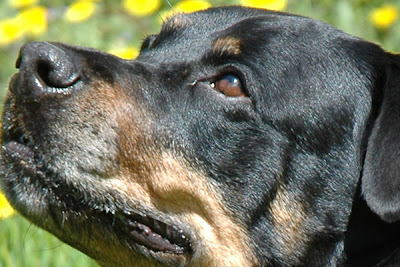 I was on pins and needles.

It didn't help that I knew that my worry was not rational. The last time we just took her for x-rays it ended up in the biggest medical disaster Jasmine had to face. Yes, it was a coincidence. Yes, it didn't have a whole lot to do with the procedure itself. Yes, it likely saved her life. Yes, she had other procedures that required anesthesia since. But she almost died!

That's how phobias are born.

Before the examination, and taking the radiographs, the vet spent half an hour observing Jasmine's gait as she walked and trotted. Her weight-bearing has now shifted towards the back end.

Typical weight distribution in a healthy dog is 60% on the front limbs and 40% on the hind limbs.

In a dog who suffered knee injurie,s it is likely to change to 70 : 30, in compensation for the weaker rear end. Before the knee surgeries, Jasmine was compensating with her front even more than that, which resulted in arthritis in her shoulders. Her shoulders were visibly broader than they would normally be.

After the surgeries and stem cell treatmen,t it shifted more towards normal, and her shoulders slimmed down again.

Now, though, it seems to be the elbows that were paying the price and the distribution is changing once again, exerting more stress on the rear end—hence her sore iliopsoas.

The good news is, that the x-rays didn't reveal any surprises.

The bad news is that her joints are more of a mess than she was letting on. That doesn't really shock me so much. She has a spirit on a two-year old, and she expects her body to keep up with that. You can try explaining to her how to behave like a senior dog, she'll have none of that. She lives by a rule “live full throttle, or die.”

Taking that away from her would mean killing her spirit.

As she came home today, still groggy from the sedation, we got a glimpse of that. That is not something we can allow to happen as long as we can help it.

So now we need to help her body to be able to keep up with her spirit. This means going back to the original plan of the stem cell treatment, except now we'll be injecting all four joints (the elbows and the knees). Hopefull,y we can set it up for Friday.

Our other options for her would be cartrophen injections or getting her back on the gabapentin. I can't tell we've seen the gabapentin ever done much good to her, and it wouldn't deal with the problem. The injections are great, but she doesn't respond to them as well as some other dogs do.

Acupuncture would be an option also, but with the travel, and with Jasmine still having four doses of stem cells banked, by the time all would be said and done, it would not end up any cheaper. She is already receiving cold laser therapy after her physio sessions. She also already is on joint supplements.

NSAIDs are out of the question for Jasmine, as when she was put on them in the past, it was the first time she almost died. Steroids is something that we're keeping as a last resort option.

Related articles:
Jasmine's Acute Lameness
Jasmine Doesn't Like "Doing Time"
Our Of Jail Free Pass
When It's Looks Too Good To Be True … The Lameness Returns
The Day Of The Treatment
First Time For Everything: A Healing Crisis(?)