From The Case Files: Hunter's Hip Dysplasia Was Nearly A Death Sentence

Hunter, a one-year-old yellow Labrador Retriever, first came to Newkirk Family Veterinarians for a second opinion on his hips in July of 2010. He was barely able to walk. 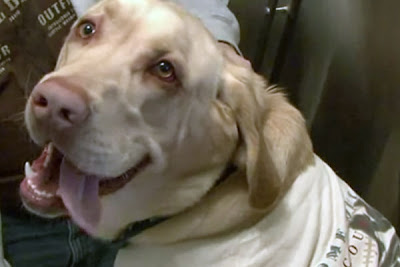 Radiographs indicated a full luxation of the right hip with a very shallow socket.

The left hip was subluxated and had a shallow socket also, but not as severely so. The owners had been told that a total hip replacement needed to be done on both hips, at a cost of about $4000 per hip. They could not afford that and had heard of Dr. Newkirks' alternative methods for hip dysplasia and chose to come. 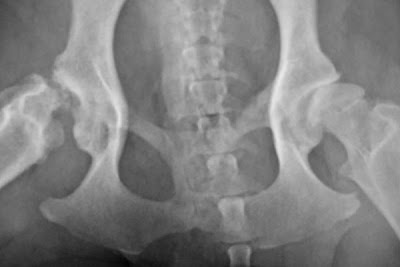 I advised that the right hip did need surgery but we could do the 'old standby' procedure of a femoral head excision (FHE), which is what we used to use before the hardware and knowledge for total hip replacement was known.

I suggested prolotherapy (injecting the tendons and fascia) around the left hip would probably help that side. Hip laxity (or looseness) is due in part to the stretching of the tendons and ligaments surrounding the joint. If stretched chronically enough due to the deformity in the joint from the dysplasia, these structures become loose as well, kind of like a rubber band that has lost its' elasticity. Thus these structures can no longer 'hold' the joint in place.

Prolotherapy involves injecting the tendons so that tiny cells called fibroblasts are stimulated to multiply and grow.

We use homeopathic tendon remedy and procaine (a local anesthetic drug). These fibroblasts grow into new, strong tendon fibers that heal and strengthen the 'rubber band', and make it elastic and strong again. This then literally pulls the joint together.

In dysplasia you must have some semblance of a joint for this to work, which is why we could do prolo in the left, but not the right hip.

In short, we did the FHE and the prolotherapy and then proceeded to rehabilitation in the underwater treadmill.  Hunter recovered well began to run and jump and play, something the owners had said he could not do at all before the therapy and surgery.

After the initial rehab period, he would come in once every 4 to 6 weeks for a treadmill session so we could keep an eye on the left hip.  Prolotherapy can be repeated, if the joint becomes "loose" again. 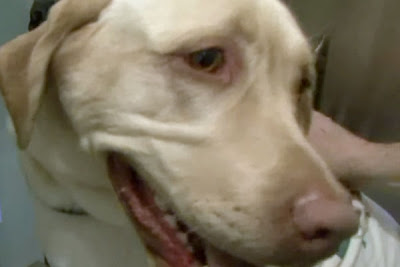 Hunter did well until November of 2010 when he started limping on his left rear leg.

We realized that the tendons were loose again and repeated the prolotherapy treatment.  This was necessitated due to the moderate hip dysplasia that remained in the left hip.  (we can't alter genetic dysplasia).

We repeated the rehab and Hunter again did well.

Hunter again was his usual Bull in the China Shop Lab until January of 2012 when he ruptured his patellar tendon (the tendon that holds the kneecap in place). X rays also showed some degenerative arthritis in the left hip, caused by the genetic dysplasia.

By this time we had started to work with stem cells and advised that a combination of stem cell therapy, surgery on the knee would be helpful.

The advantages of stem cells treatment are that they have the power to differentiate themselves into any tissue you inject them into.  In a joint for example, there is cartilage, bone, tendon, (and menisci in the knee).  If in fact all were damaged (and they usually are to some degree) the stem cells will go to that tissue and heal them all. We did follow up Hunter again with treadmill therapy and rehab and that is where we are today.

Hunter will continue to have some problems with the left hip, but he is alive and well and playing nearly 2 years after he first came to us.

Had there been nothing else but total hip replacement available, Hunter would have been put down due to the expense.

Don't hesitate to seek a second or even third opinions, and consider alternative therapies, before giving up.

You can watch a video of Hunter's procedure here.

Other case files:
From A Swelling To Necrosis In Days
What The Prostate Exam Revealed