A patient suffering from one of the fastest growing canine toxicities presented with the need for rapid detoxification. No, the dog did not overdose on medical marijuana baked goods (not an uncommon, inappropriately consumed treat in West Hollywood); he snuck into his mom’s purse and found her half-full pack of Wrigley’s Orbit Strawberry Mint sugar-free chewing gum.

Poppa is a very sweet Chihuahua with a reputation for dietary indiscretions. 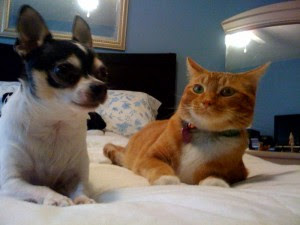 According to his mother, Poppa and his feline companion, Pumpkin, conspire in these incidences. Evidently, the Pumpkin acts as Poppa’s enabler by knocking items off of the countertop or creating a scenario where access to forbidden consumables is more easily permitted.

Pumpkin reportedly aided Poppa’s ingestion of the Orbit gum from his mother’s pocketbook.

I more commonly see dogs ingest gum encased on a paper wrapper than that in a sealed blister pack.

Test it yourself, as there is no such detectable smell from gum where each piece is “blister wrapped” like Trident White. The strong aroma emanating from Orbit gum prompts a dog, like Poppa, to commit the act of inappropriate ingestion.

In my clinical practice, I often face situations where an owner is unaware that a substance having a potentially toxic effect has been consumed by their pet.


A variety of manufactured and natural substances can cause toxicity to multiple body systems.

The Xylitol (sugar alcohol which acts as a sugar substitute) in sugar-free gum only needs to be consumed in small quantities to cause hypoglycemia (reduced blood sugar), liver damage, and diarrhea. 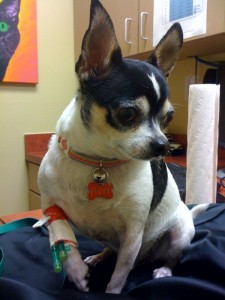 A dog of Poppa’s size will suffer toxic effects from consuming only a few pieces of gum.

An estimated 7 pieces of the gum were consumed by Poppa on that fateful day.


Emesis induction (vomiting) was recommended to initiate the decontamination process.

The hypoglycemic effects of Xylitol typically last for at least 24 hours, so Poppa was started on IV fluids containing dextrose (sugar) to combat the likelihood his blood glucose would drop. Additionally, Poppa received a Sam-E and Milk Thistle supplement to support his liver function.

Thanks to the immediate treatment, besides having transient diarrhea, Poppa suffered no further ill effects of Xylitol toxicity. His follow up blood tests revealed normal liver values and Poppa was discharged from the hospital.

I sympathize with Poppa, as there was no malicious intent on his part to consume the delicious smelling Orbit gum.


Thankfully, Poppa’s very concerned owner immediately brought him to a veterinarian for evaluation and treatment.

He earned this certification after he graduated from the University of Pennsylvania School of Veterinary Medicine (1999) and completed an internship at Friendship Hospital for Animals in Washington, D.C (2000).

Why does he believe so strongly in acupuncture for your pets, especially as a pain management tool? Because combining both Western and Eastern treatments can produce a better outcome for your pets.

Dr. Patrick also works with local Los Angeles rescue organizations to help those pets that have been given a second chance to live healthier lives, and he is currently sharing his pet care knowledge at his Los Angeles Pet Care Examiner column.