If It's Got To Be A Lump, Let It Be Lipoma

July 23, 2011
The other day I met a nice family, walking their mix-breed dog; friendly fella. As I was petting him I felt quite a large mass in the tissues under his neck.

In the dog's interest, I asked whether they were aware that their dog has a lump.
“Yes, we know about it,” they replied, “we're quite sure it's a lipoma.”

The first rule of lumps, don't be quite sure, be SURE!

“We're quite sure” answer only means that they made an assumption and that didn't have a vet check it out. Bad plan.

If you find a lump, anywhere on your dog, off to the vet you go.

If it is harmless, and some are, you will sleep better. If it is not, the sooner you get it diagnosed and treated, the better.

I don't know what they based their assumption on; maybe they have seen a whole lot of lipomas of the same size, hardness, shape, and location.

However, even if I saw a thousand, I would still want to have it examined. 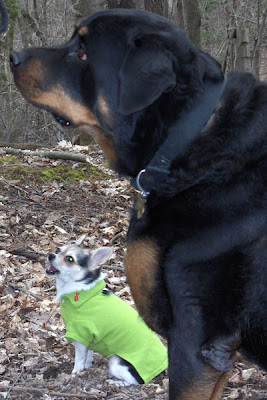 From the day our late rescue, Bruin, came to us, I was convinced that his chest looked weird.

It was apparent particularly when he was sitting. Nobody else seemed to see what I saw, including the vet.

“He's a big boy, that's just how his chest looks.”

I was never quite comfortable accepting that answer, but since even the vet was convinced that his chest was perfectly normal, who was I?


He was a big boy and he was quite obese. He looked like a beer barrel!

We gradually introduced him to Jasmine's exercise routine and he slowly started thinning out.

And then one day it happened.

Hubby and the dogs were at the friends' farm when he called, all distraught, that Bruin has a huge lump on his chest!

We decided to take him to the vet immediately. The vet suspected lipoma and a biopsy confirmed that.

The lump was the size of a baseball!

Where did it suddenly come from? Nobody grows a lump that size overnight, do they? It was there, sitting on his chest all along. But as Bruin was losing weight, it must have gotten lose and shifted to the side. It definitely became apparent then!

We did discuss whether it should be removed surgically, mainly because of its size, but it was not really in the way of anything and we decided to leave it alone.

So what is a lipoma?

If you do find a lump on your dog, a lipoma is the word you do want to hear.

Lipomas are quite common in older dogs, particularly if they are also overweight.


A lipoma is a benign growth, consisting of mature fat cells and fibrous connective tissue.

Lipomas don't hurt and most of the time don't bother anything.

They can become a problem is when they're interfering with mobility or are growing rapidly. In such cases, surgical removal might be necessary.

Lipomas normally grow quite slowly. I can only imagine how long Bruin's must have been growing to that size! I hardly changed after it was finally diagnosed.

The main thing about lipomas, however, is that you can't just decide that the lump you found on your dog is probably a lipoma.

I don't care how many you might have seen in the past. Get a needle aspiration or a biopsy!