June 09, 2011
Veterinary Partner calls bloat the Mother of all Emergencies.

According to some sources, bloat is the number two dog killer, right after cancer!

Having Rottweilers, bloat is always in the back of my mind, and I try to take all possible precautions to prevent it from happening to our guys.

If there are any monsters in a closet, bloat is certainly one of them! 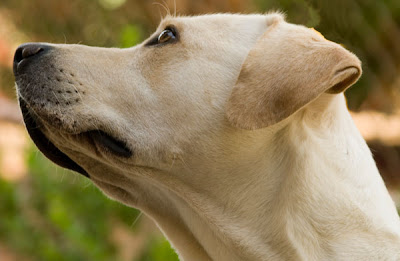 My friend and fellow blogger of Dog Training San Diego agreed to share Barbie's story with us.

The Dangers of GDV
by Meagan Karnes

The other night, we lost one of our canine friends. Barbie came to us from Labrador Rescuers, a group that saved her from an unknown fate.

When they broke her out of doggy jail, they realized she suffered from a bad case of separation anxiety so they called The Collared Scholar for help. Barbie joined us for some rehabilitation and confidence boosting.

The other night, Barbie started displaying some abnormal behaviors that led us to believe she was suffering from a condition called bloat.

We rushed her to the emergency clinic where the grim diagnosis was confirmed.

Bloat is a condition where the stomach fills with gas and becomes incredibly painful. In some cases, the stomach can torsion, in essence flipping over.

We have had experience with the disease in the past as our Great Dane suffered a bad case of bloat and torsion several years back.

When the stomach torsions, surgery is typically the only option. Our Dane was saved by the surgeons at the Animal ER in La Mesa, CA.

When bloat happens, you must seek veterinarian care immediately as it can be fatal and can progress to life-threatening in less than an hour!


Time is of the essence when dealing with bloat!

In dealing with the condition twice now, I’ve noticed the same symptoms pop up consistently.
Other symptoms have also been noted including coughing, whining, pacing, licking the air, drinking excessively and shallow breathing.

There are articles abound regarding prevention of bloat in dogs.

The most common tips at prevention are:
I can also tell you from experience that in both cases of bloat, we did everything right – followed the prevention guidelines to the letter.


In Barbie’s case, the vet suspects the condition was triggered by the stress of a change in environment coupled with a change in diet.

This a great reason to provide your pet’s food if you plan to put them in boarding. In Kira, my Great Dane’s case, the vet had no idea what may have triggered the condition.

After my experiences, my thought on bloat is this – no one really understands why it happens.

I believe there to be a genetic component to the disease. Sure, there are the dogs who break into a bag of treats and devour the entire thing, leaving a food bolus that torsions the stomach. But in many cases, owners are prepared and follow the rules and GDV still rears its ugly head.