Know Your Dog's Enemies: Heat Stroke Is No Light Matter!

May 31, 2011
The weather is getting warmer again. Do you know that too much heat can seriously harm and even kill your dog?

Dr. Laci Schaible of VetLive wrote a great post that will help you brush up on your knowledge: Overheating in Dogs, please do read it.

It is easy to underestimate the effect overheating can have on your dog. Don't! 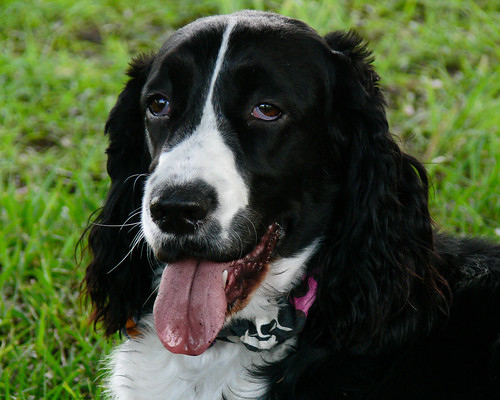 Of all the bad things that happened to Jasmine is the past couple of years, hyperthermia was by far the worst.

Jasmine's was not a typical case of heat stroke. But at the end, the result is the same, regardless of the cause.

The day started innocently enough. We took Jasmine in for x-rays. She had x-rays done a number of times before and we didn't think much of it. In fact, the plan was that after that was done, hubby was going to take her to the farm for the rest of the day.

Little we realized the horror we were in for!

Jasmine was showing pain as a result of her neck being manipulated to get the right shots. To relieve the pain she was given a shot of Buprenorphine. Shortly after that, her temperature spiked to 42.5°C!

Even though she was given shots to counter the effect of the drug, and alcohol rub downs, her temperature remained quite high for quite a while. It wasn't until almost three hours later when her temperature got back to normal.

Hubby called me that she spiked a fever and he's waiting for her to stabilize before he can take her home.

I was terribly worried. However, I was told that's she's stabilizing and within couple of hours she can come home. I was also told that she will be very tired and weak, which should resolve by the next morning.

When Jasmine finally came home she looked like a train wreck!

Being tired and weak didn't even begin to describe it. It took all her strength and determination to make it into the house on her own power. She collapsed on her bed. She needed help to get up and have a drink.

We all slept on the kitchen floor with her that night.

I kept being hopeful that things indeed will improve by morning, but I didn't hold my breath.

Indeed, in the morning she was in a worse shape yet. With help, she struggled to go to the bathroom and her pee was brown! She also had what looked like bruises on her tongue.

That was all I could take. We rushed her to the emergency.

They didn't even believe us that with a bit of help to get up she could stand up on her own. After an exam and a set of x-rays, we were told that she likely had either her liver or kidneys were failing and that she likely had multiple perforations in the intestine. Say what?

As all this sounded like a death sentence, we insisted on a transfer to a teaching hospital.

Their assessment was that her liver, not kidneys, was in trouble and that she doesn't have perforated intestine but a large abdominal abscess. Her platelets and her muscles were fried by the hyperthermia. She was in a bad shape, was going to need intensive care and a surgery but they believed that she can make it.

It was a race against time. Her platelets needed to get to a safe level for the surgery and the surgery needed to be done as soon as possible!

Jasmine has always been a fighter and two days later she was able to get the abscess removed. However, at that point, she wasn't able to get up or walk at all!

She spent a week at intensive care but still was not walking. They kept blaming it on her knees but we knew her legs were working fine before all this happened.

We decided that hubby should go and visit her. I was so distraught that we didn't feel that my visit would be of any help.

They wheeled Jasmine out and laid her on the grass.

When she saw hubby, with all determination she could gather, she started struggling onto her feet. With a great effort and a lot of help, she made her way towards him. The technicians kept calling out, “she's walking! She's walking!”

The next evening they told us that we can take her home. She was so happy to see me but looked so horrible that I wept. “Yes, darling, we are taking you home,” I kept telling her. That was all she wanted too.

She still couldn't get up without help and her legs kept folding under her.

Her legs felt as if they were just bones and skin. It took another week before she could get up and walk without help or stumbling.

It took another month before she started getting her strength back.

Granted that almost dieing in fact saved her life, it was the darkest time in her life. So please, don't underestimate the effect overheating can have on your dog!

Ever since I am very paranoid about Jasmine's body temperature. I always have a thermometer and cooling aids on hand and keep watching like a hawk. I keep monitoring the slightest changes in the color of her tongue and gums.

God forbid she should have to undergo something like this ever again!

Keep an eye on your dog and catch the signs of overheating early!