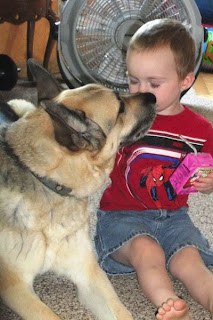 Check out my earlier article to learn more about Exocrine Pancreatic Insufficiency and what pancreas does.


Everything Beaner ate was going right through her and that she was likely suffering from EPI; Exocrine Pancreatic Insufficiency.

I said, “exocrine, what?” The vet explained that there are certain cells (acinar cells) found in the pancreas that are needed to produce and secrete enzymes needed to digest food. They are:


Beaner can no longer produce what is necessary to digest her food and allow her body to absorb and utilize the nutrients – basically, she was literally starving and without treatment, would not live!

EPI is not curable, only treatable with specific enzymes. I made another appointment to go in as soon as the other tests were completed.

After hanging up with the vet, I sat down and cried!

How could I not have known it was this serious? What kind of mom am I?  Why didn’t I take her in sooner?  I decided to do some research.  I read more about the enzymes that were needed to digest food, about how this disease can affect other parts of a dog’s body; organs, immune, nervous system, and mental status. Dogs suffering from exocrine pancreatic insufficiency can become depressed, aggressive and/or fearful.

I also found out that this disease is very hard to diagnose and that many times the obvious symptoms do not reveal themselves until 80-90% of the exocrine pancreas acinar cells are destroyed.

While that did not change anything, it at least eased my mind a little in that I was not beating myself up – as much. I pride myself on being very aware of my dog’s health and daily routines and now this is the second dog that something serious has happened and I didn’t realize it immediately. First Indy with his dysplasia and now Beaner with EPI.

A few days later we were back at the vet.


Beaner’s urine test was perfect and her blood work was as well. No protein loss and no cancer.

The vet discussed a more specific test where blood would be drawn again and sent down to Texas, the only lab in the US that conducts this particular test and runs approximately $200.00. This test, called a cTLI test, is the only test that can confirm EPI. One is looking for a range between 5.0-35.0.


Now I had to decide what to do.

Her blood work was normal, her urine was normal, her stool was grey, slimy, running, she was losing weight, bony frame, losing hair, fur turning brittle, mental status changes, tummy gurgling/gas – classic EPI symptoms. The enzymes she would be started on is $150.00 a bottle which lasts approximately 6-8 weeks.


I made the decision to start Beaner on the pancreatic enzymes without having the cTLI test as I completely trust my vet and he has seen this many times before and has patients suffering from this disease.

Of course, we could perform the cTLI at any time if I chose to do so but for now, I chose to get her started on the enzymes right away.

There are a few ways of treating this, but the recommended treatment is powdered porcine pancreatic enzyme, which, by the way, does not smell very good.

The vet warned me it smells like vomit and I asked if Beaner will even eat it if it smells that bad. His response, “she eats poo doesn’t she?”.

Touché. As it turns out, it is not as bad as they made it out, but you definitely do not want to get your nose too close!  I picked up a few cans of pumpkin and canned dog food on our way home with enzymes in tote.

The directions state that the enzymes must “incubate” for a minimum of 10-15 mts so I measured 1 tsp with a good size spoonful of canned food, mixed it really well and let it sit for the appropriate time. Meanwhile, the dogs are going crazy because they know it’s dinner time, they see me preparing the food and then they have to wait! Not happy campers I tell you!

I continued this regimen for a few days.

I got Beaner’s food ready in the morning after my work out and while I was getting ready for work which worked out well, but it was the dinner time regimen that was a nightmare for everyone.

I remembered a Yahoo Group that I found and joined for owners of EPI dogs and posted my dilemma.

I received a number of really great responses! Many people had the same situation I did. They worked late, multiple jobs and didn’t want their dogs to have to wait to eat after a long day.

It was also recommended that depending on the level of the disease, feeding small amounts multiple times a day was the best thing to do until it was under control.

The idea that worked best for me was to place her dry kibble in containers along with the enzymes and shake really well so all the kibble is coated. I have about 5-6 containers in the fridge at all times. When I feed the dogs at night, I add just enough water to barely coat the kibble and let it sit overnight for her morning feeding.  In the morning, I do the same thing for her evening feed.

This is a great idea if one is going on vacation and either has a pet sitter coming in or wants to make sure the boarding facility has the appropriately mixed food/meds.  It was even suggested to mix food, meds, and meds, let it incubate a few hours and then freeze it!

With my schedule, working 3 jobs, and crazy hours, this formula works great for Beaner.  If I’m going to be running late, I can have a neighbor come over and feed the dogs and know she is getting exactly what she needs.

Okay, so back to our story.


The first week was difficult as I was not seeing any changes in her behavior, appetite, poo eating regimen, attitude, weight – nothing! 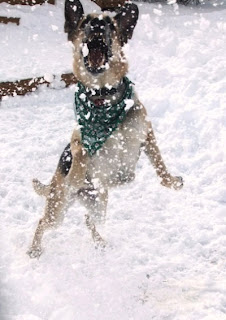 I called the vet and he said we needed to give it a bit more time. If I was still not seeing any changes in another 4-5 days, we would move forward with cTLI test.

A few days later I was looking out the window and saw Indy outside doing his duty and Beaner right next to him waiting for him to finish. I was just about to tell her to leave it so I could pick it up when much to my surprise, she sniffed it and walked away!  I knew that this meant progress was occurring and she was feeling better!  The enzymes were working!

Each day I noticed more and more signs that she was doing better.

She was not as ravenous at the food bowl, her fur started to feel less brittle and after about a week, actually started feeling soft again! She began to get that spark back in her eyes and spunk in her attitude!  She even began to smile and wink at me again!


She was able to play and walk longer without getting so tired she could barely stand up and her mental status became more stable.

She became tolerant of the little things again and her depression was going away. I knew she was really feeling better when her nosework started going from hunting for the food box because she was starving to hunting because she loved the game!  My girl was back!

It has now been about almost a month and she has gained 5 pounds!

Her fur is really soft again, she plays, throws her toys at me, runs and has that sparkle in her eyes again!  We still have a ways to go to put another 12-15 pounds but we are well on our way to better health.  Although her normal weight when she was younger and healthier (developing some hip/joint issues), the vet and I decided not to bring her weight back to her 76-80 pound weight but to keep her at about 70-72 so as not to put too much pressure on her joints.

Beaner will need to have her enzymes for the rest of her life, but now that we have finally gotten the right diagnosis, she is getting healthier day by day!

I do, of course, continue to read and converse with my Yahoo EPI group as there is always something that comes up in someone’s life that we can learn from to help Beaner in her recovery. They have been a wonderful support group and wealth of information.