The first few years of Lincoln’s life are a mystery to me.


I suspect his serious food allergies were what landed him at the shelter at what we guess was the age of five.

I do know he was saved from euthanasia at the shelter by a rescue group and spent the next seven months at their kennel. I found Lincoln on a Petfinder search in 2005, and I knew it was meant to be. As a fan of presidential history, I name all my pets after famous politicians so he was a perfect fit.

Within a week, I was surprised for my birthday with a trip to meet him and the rest is history.

From the start, Lincoln has been the perfect sidekick. 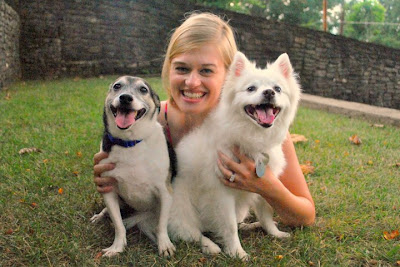 I quickly learned that Lincoln’s biggest passion was canned food as he practically becomes a wild dog at the sound of a can opener. His calm, sweet disposition makes me love coming home every day. In the early days, we went on walks every day and he slept in my bed each night.

One night almost a year after his adoption, Lincoln started acting odd.

I was working the night shift and noticed that he seemed sluggish or depressed as I left for work, but it didn’t seem serious.


By the time I returned the next morning he was feeling much worse and wouldn’t move from the odd angle he was sitting in.

When he didn't come running or even touch his canned food, I took him straight to the vet.

Upon the initial exam, it appeared to be a minor back problem. They told me to leave him there for the day and he should be able to come home in the afternoon.

By lunchtime, they called to say he worsened and they’d scheduled Lincoln an appointment at the University of Tennessee Veterinary Hospital for emergency back surgery.


It turned out that Lincoln had ruptured a disc in his spine and the discs were crushing his spinal cord.

It was causing extreme pain and risk of long-term loss of movement. After several tests at UT, they located the exact spot and came back to share with me my options.

To be honest, the thought of not giving Lincoln all the medical care he needed never crossed my mind.

Even as a broke 22-year old college student, I knew I had to take care of my best friend.  So when the doctors outlined the extensive tests and surgery Lincoln would need and the four thousand dollar cost, I simply asked where I could sign.

Hours of surgery, days in the hospital, and six weeks of strict cage rest followed as I helped nurse him back to health.

In the beginning, there were lots of questions.  Will Lincoln ever walk again?  Will he be able to control his bladder and bowels?  We just didn’t know.


It was critical for his recovery that Lincoln stays in his cage with the only exception being brief potty breaks.

I found that as Lincoln started to feel better, it became harder and harder to keep him cooped up.


On occasions, I would put his cage in a wagon and roll him around the neighborhood on our walk route.

Slowly over many months, Lincoln began wagging his tails, hobbling, and controlling his bodily functions.  And for the most part, other than a funny little walk, he recovered back to his old self.


Years went by with a great bill of health until this past fall when history repeated itself.

Almost identical to the first experience, Lincoln’s vet performed an x-ray and sent us urgently back to the UT Vet Hospital.  Another disc injury, this time pressing on a nerve to his leg, another four thousand spent to keep him well.

Some have been quite puzzled at the amount of money I’ve spent on Lincoln and even questioned me on taking on such financial risk for a dog. Frankly, when the bill comes, it’s a monthly reminder of how grateful I am that he’s still around.


Lincoln is much more than a dog or even a pet to me.

He’s one of my best friends and a source of unconditional love and friendship.  I know he’s cost a lot of money, but at the end of the day, I can honestly say he’s been the best $8,000 dollars I’ve ever spent.