We had a wonderful but unique Christmas this year. For the first time in a very long time, we got to experience a white Christmas at Lake Burton.


The cold also brought with it an unexpected guest to the doorstep, a very neglected but very sweet hound dog who we are lovingly calling, "Buddy." 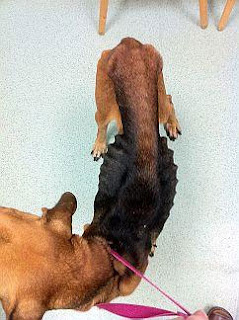 We are not sure how long Buddy was roaming the woods or where he came from, but it is obvious from his appearance and his overly-voracious appetite that he had done without food for a very, very long time.

We brought Buddy back down the road with us and took him to the vet, expecting the worst but hoping for the best.


According to the vet's best estimate, he was about 40 pounds underweight!

He also had some intestinal parasites and was not keeping food down well.


We are not sure what the future holds for us and Buddy. We want to do all we can to help him out. 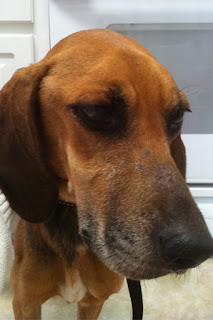 His tail has not stopped wagging, even after all that he must have gone through, and his sweet eyes tell us that he still has a lot of life left in him.

The recovery process will not be easy.  We have two small children and two pets of our own and, although we have a fenced in backyard, we are going to have to be very creative in coming up with living arrangements for Buddy.


He will require a special, high-protein diet for a while and will undergo more tests when he is healthy enough to do so to make sure there are not any more serious underlying conditions we are not aware of.

Buddy has recovered enough that we could bring him home yesterday and he spent his first night with us. He has been used to the outside for so long, that sleeping in a crate is quite an adjustment for him.  He has a very distinctive bay that he likes to share with us when he needs to go out but, amazingly, he is fairly calm otherwise.  He loves being outside and walks well on a leash.


He has already met his first playmate across the street and seems to show a lot of spunk and zest with other dogs, which makes me think he is younger than the original estimate. 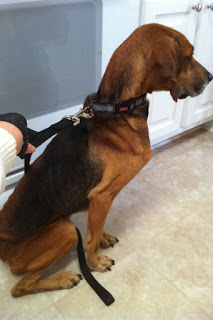 He "freaks out" when you whistle and goes on high alert, which makes me think he was a hunting dog at some point.

We are almost certain that he is a bloodhound, or at least has a large percentage of bloodhound in him.  He has the body, coloring, and bay of a bloodhound as well as the distinctive hound odor.

The vet has put him on an oral antibiotic (once a day) for the worms and diarrhea as well as high-protein puppy food (1 cup, three times a day).


The goal is to get him to 45 pounds in the next few weeks (20-pound weight gain) so that he can receive his vaccinations.

We will also have to get him neutered, but that will occur once he is at a healthy weight.  He is allergic to fleas and is mildly infested so we will be putting him on Comfortis soon.

Times are tough for everyone, but if anyone would like to help make Buddy's recovery easier, we could use all the help we can get to help bring Buddy back to his happy, healthy and handsome self.