October 05, 2010
I met Lisa Muscillo, on VetStem's Facebook page. As we are both equally delighted at what stem cell therapy did for our dogs, I asked her to share her story with us. 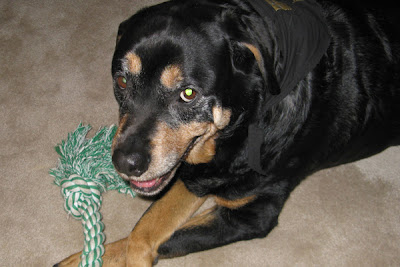 Zeus is a 10 year old Rotttie. He is a highly intelligent soul who is acutely aware of my love for him.


That's why for his 10th birthday I got him a present of stem cell regenerative therapy!
Zeus had an old injury he received when he was about 4 yrs old playing ball. He was practically raised on a tennis court due to my passion for the sport. He should have been named Deuce. His injury was a hairline fracture of his front right wrist.

Over the past couple years it became a source of pain due to bone spurs and arthritis which formed around the fracture site. Which causes other imbalances due to compensating.


Over past couple years Zeus' injury site became a constant source of pain.
He couldn't go on extended walks, which became increasingly shorter. He would lag behind and when I turned to look back at times he would just be sitting holding his front right paw up.

Zeus is a working dog and I had to reduce the days a week he could go to work. No more nursing home visits because he was cranky. I had to take and  hide tennis balls because like any athlete his desire was still there.

For past couple years he did no jumping, I had to lift him in and out of car. I moved to another house because the stairs where we previously lived became to much of a struggle for him. He wouldn't go to his toy box as often. Due to compensating, his hips, shoulders and elbows became strained and arthritic.

His wonderful doctor and I had tried all the conventional and practical approaches - medications, physical therapy... with results I was never satisfied with.


Then last year our vet suggested to consider stem cell therapy.
I was like "Yeah right !"But after some extensive research it sounded promising. "Let's Do It!" I said.


It has been the single best decision I have made for my companion and best friend!
As crazy as it sounds I saw significant improvement within 2 days! Since July it has been so delightful to see my sweetheart feeling 3 yrs younger! He is smiling more and he's got more pep in his step. I'm so happy to have given him the opportunity to feel fabulous again. It's the least I could do for my loving & devoted best friend. 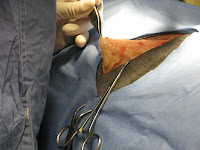 The stem cell procedure included initial blood work and x-rays. The harvesting process required a minor surgery around his rib cage where his vet removed 3 table spoons of fat and sent it to Vet-Stem where they extracted and counted the stem cells from the fat tissue. 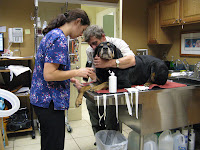 The 3 table spoons of fat tissue returned about 2 million stem cells. Zeus went in the following day and was sedated to get about 300,000 cells injected into his wrist and some in his elbow. The rest of cells are banked at Vet-Stem in San Diego for future use.


Stem-cell therapy makes perfect sense when you think about it.
Your own body healing it's self. I highly recommend it. 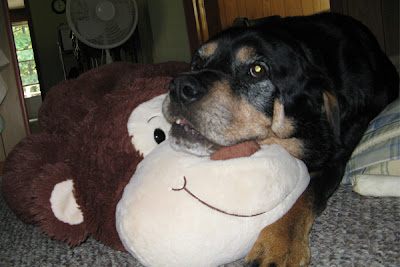 Since his treatment Zeus feels significantly better. The funniest thing to me was when 2 days after his injections he ran to his toy box, got his big teddy and came running out of room shaking it and wanting to get frisky with it. We cab now go for longer walks. We play ball a little, mainly in the house. He goes to work more often. He's happier and so am I and that's all that really matters.

We are just as happy with what stem cells did for Jasmine. Even though she is a constant source of challenges, the joints treated are working great and she is full of beans and enjoying her life.