June 05, 2010
To vaccinate or not to vaccinate, that is one of the big questions today. However, even the experts who believe that we are over-vaccinating our dogs agree that there are at least three infections for which vaccination is a must. These are rabies, parvovirus, and canine distemper.

Canine parvovirus is an acute, highly contagious disease that is often deadly, particularly in young puppies. It spreads quickly and primarily attacks the intestines and bone marrow of the infected animal.  Dogs typically start to show symptoms about a week after they have been infected with the virus.

Protecting your dog from exposure to parvovirus is virtually impossible and vaccinating is imperative. Vaccination will prevent most, but not all cases of parvovirus infection.

If your dog starts showing any of the above symptoms, particularly if he has not yet received all of his vaccinations, take him to the vet immediately. His chances of survival depend on how quickly he gets diagnosed and treated.

Parvovirus treatment consists of medications to relieve nausea, fluid therapy, antibiotics to treat or prevent secondary bacterial infections, and sometimes plasma transfusions and anti-viral drugs until his immune system can fight off the infection.

Cosmo is a one-year-old Chihuahua and parvovirus survivor. Here is his story. 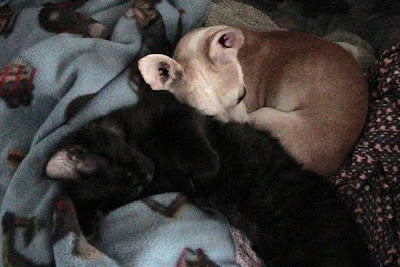 It happened on a Sunday just before we were to take Cosmo in for his 3rd and final Parvo shot that week.

We have a yard that is fenced in on 3 sides so we have to keep him on a leash when we go outside. Even then he is really fast at grabbing odd things and eating them before we can stop him.

It was the 2nd time out of the day when he immediately grabbed a dead mouse the cat had left. It was a struggle getting it away from him. Then on the other side of the house he got his nose right in a pile of fresh, very nasty looking poo that was not his. It was bigger than what he could do, and it wasn't there earlier.

By 5 that evening he wasn't looking too good, then he started to vomit and had some diarrhea. I started to think that the neighbor had been poisoning rodents because he feeds the birds and lots of the feral cats in the neighborhood had disappeared.

Cosmo got worse as the night went on. I stayed up with him all night offering him water even though he was vomiting it right back up. I kept giving him water, and he knew he needed to keep drinking. Every hour he would go through a bout of vomiting and diarrhea. He was so uncomfortable  and dirtied about 15 towels.

We only had a few more hours before the vet would be at work, but it seemed like days. We called the vet the moment they opened, but already they had some emergencies to deal with and couldn't take us for another couple of hours.

I had seen Parvo when I worked at the vet’s office. Cosmo’s diarrhea didn't have that distinct smell and no blood, but the vet said it was Parvo, which seemed like an even grimmer situation than a poisoning.

Poor Cosmo stayed at the vet for about 7 days and was on IV fluids the whole time. Everyday the report from the vet was “You may have to make a decision” or “He's not out of the woods.” If he had never got the first 2 shots needed, he would not have made it two days.

Finally we got him home, even with the vet saying “he is still not out of the woods.” He was so skinny! He could only eat i/d food and would still barf sometimes, so we had to feed him very carefully.

It took him about 3 weeks to get off the i/d and start to look better. His intestinal fauna was still messed up so I asked the vet for some beneficial bacteria, His poo got back to normal a few weeks later. It took him about 2 months before he got his proper weight back.

It took him about 2 months before he got his proper weight back, and in that time he grew in height faster than he gained roundness.

After being in the vet office for a week, he not only recovered but also learned how to bark. He is now fine and a very smart fellow. The vet said he is totally immune to Parvo and will never get it again no matter what.

Knowing the health challenges your puppy might be facing is crucial. Be an educated owner!

Cosmo's story is brought to you by Tiny Pearl Cat's blog, check out Cosmo's page.