April 19, 2010
When asked whether they would prefer a smart dog, most people would say yes. All I have to say to that is, be careful what you wish for!


Having a smart dog is great. But when the dog is smarter than you, you have a problem.

It has happened to us! Jasmine is an extremely smart dog. If she had thumbs she would have a job at Nasa by now.

Having a smart dog is great for many things. It took just one week to get Jasmine house-broken! Teaching her new things was a breeze!


Unfortunately, she was learning new things on her own as well...

She has always been very inquisitive. Always watching what everybody was doing, figuring out why they're doing it, and how she could benefit from that. If there is a way, she'll find it.


She knows what we're thinking before we even think it.

She knows how to play her cards just right to get what she wants when she wants. As my husband says, she is smart enough to have trained a woman! Which would be me by the way. And I can tell you, she has trained me well!

Just recently she had a flare-up of allergies and one of the measures we were going to take was stopping her from munching on horse poop because there is a potential that some of the grasses might be causing the problem. This would normally be an easy enough task, but not when she's spending at least two days a week at friend's horse farm. 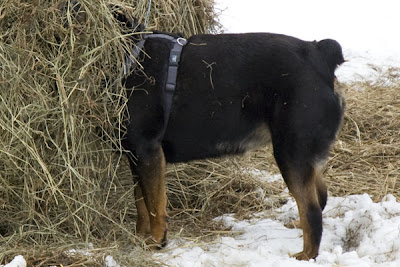 Explaining to her that we didn't want her to eat that was the easy part.

She got that quickly. She also quickly figured out that if caught, we will prevent her from eating it. The formula was simple: horse poop, plus biped watching, equals no horse poop for me.

She would be on her best behavior and wouldn't even attempt to come anywhere near it as long as she knew that somebody was watching. She would also be paying close attention to what everybody was doing and when they were distracted enough to make a break for it.


It was actually quite comical to watch her tactics.

She would pick just the right moment and slowly walk off a few feet. Then she'd stop and look back to see if anybody noticed what she was doing. Then slowly move another few feet... until she was far enough to take a run for it.


Of course, by then somebody would notice and come running after her.

The only result of all that was, that once she reached the pile, she would gobble down as much as she could before the biped could arrive. At the end, she ended up eating substantially more than she would if we just let her do what she pleased.

Our vet suggested using a cage muzzle to put a stop to her horse poop snacking. As much as we didn't like the idea, we did consider it. But we are not going to bother. Why?


Because there are holes in that muzzle!

It would be just a question of a very short time before she'd figure out a method of getting the poop through. We have no illusion that the muzzle would have any effect other than making it an interesting new challenge.

As we were watching where the situation was going, the only conclusion was, that by trying to stop her from eating it was just making it that much more desirable.


Forbidden fruit is the sweetest.

So we decided to try reverse psychology. That is working the best so far. Not that she won't get into the poop and munch on some, but it seems to dramatically decrease her interest and the amount she actually eats.

Yes, we did consider things like a positive interrupter. But we've known Jasmine for almost 7 years now. I can just see what would happen with that. Should we try putting her horse poop munching on cue and gradually fade out the cue? I really think that it doesn't matter what we'd try. She can see through things like glass. I kid you not.


So how do you outsmart a smart dog? You don't. Just forget it.

You can either win her cooperation or lose.

When picking a second dog, so Jasmine would have a buddy, one of my criteria was – no more smart dogs! I want a dog smart enough to understand what I want from him, but not smart enough to figure out a way around it! Fortunately for us all, J.D. is just that.

Do you think you could outsmart Jasmine? You are welcome to try!

Related articles:
A Word on Training
The Easiest Thing I Ever Taught My dog
More Than Meets The Eye: Dog Language And Beyond