March 14, 2010
There is a new type of surgery out there to repair ACL injuries in dogs. It is called Triple Tibial Osteotomy (TTO).

The first time I came across this information was on a New Zealand Rottweiler forum. It caught my attention, so I did some further research.

This newest approach to repair a stifle with a ruptured ACL originates in Australia. 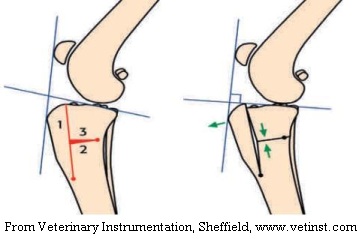 It was developed by a New Zealand orthopedic specialist Dr. Warrick Bruce and seems to be quickly gaining popularity in New Zealand, Australia, and England.

It doesn't look like it has made its way to North America yet, but it appears to be a good alternative and I am hoping that it will become an option for dogs here also.

It is less invasive than the commonly used TPLO and it seems to have fewer problems associated with it than either the TPLO or TTA surgeries.

Triple Tibial Osteotomy is a hybrid of both of the already available Tibial Plateau Leveling Osteotomy (TPLO) and the Tibial Tuberosity Advancement (TTA).

The ultimate goal of all of the knee repair surgeries in dogs is to regain joint stability after an ACL injury. In TPLO, TTA, and TTO this stability is achieved by altering the anatomy of the stifle joint.

Triple Tibial Osteotomy is a descriptive name of the procedure. It consists of three straight cuts to the tibia, none of which are all the way through the bone.

Triple Tibial Osteotomy eliminates the need for a circular cut that is needed in the TPLO. This results in better stability during the healing phase. A straight cut also generates less heat. This decreases the risk of burning the cut surfaces of the bone, eliminating delay in healing.

Instead of cutting an entire piece of bone as in TPLO, only a small horizontal wedge is removed from the main bone shaft to level the tibial plateau.

Similar to TTA, the front wedge of the bone is pushed forward.

This surgery seems to have a high success rate. Studies show that the joints repaired with this technique are very stable. It is less invasive, easier to do and seems more reliable than the TPLO and TTA surgeries.

I am not a surgeon, but it definitely looks very good to me. I would want to have the TTO as one of my options to consider if I had to make a decision today about knee surgery for my dog.