Don't Go Look At Puppies, Unless You Want To Have A Dog

February 15, 2010
Word of the wise. Seriously, don't do it. Puppies are just so adorable, the chances you'll walk out without one of them are minimal.

When our first Rottweiler died, it was very sad and heartbreaking. She started having seizures and her nervous system just gave up. We had to put her down.

After that, I felt I didn't want to have any more dogs. But I knew my husband did, and it was only a question of time when he would bring it up. I was hoping to extend that time for as long as I could.

One evening he was telling me a story about his friend, who got woken up in the middle of the night by the police because he was being robbed. Sleeping soundly, he had no idea that the burglars were in his house. Making small talk I said that maybe having a dog in a house isn't such a bad idea after all.

The moment the words came out of my mouth I knew I was doomed. But my husband didn't say anything. I hoped that maybe he didn't catch that.

However, a couple of weeks later he mentioned that there are Rottweiler puppies for sale and why don't we just go look at them. We don't have to get any, we'll just look.

Accepting the inevitable, and still hoping that we indeed might just go and look, I agreed. 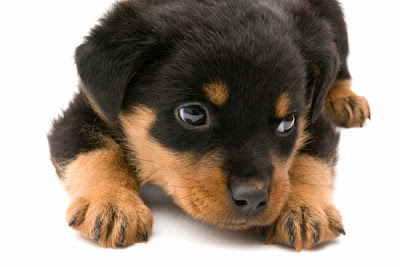 Well, we came, we looked, and it was really hard to walk out with just one. That's how Jasmine came into our lives.

Besides them being extremely cute and adorable, the thing that did it for me was their nature. The breeder had them out on a porch in a little inflatable pool to contain them. But they all managed to climb out of it when they saw that something interesting was going on. All except the runt of the litter, who was too small to make his great escape.

When the other puppies noticed their brother having difficulty they organized a rescue mission. Some pushing, some pulling, all working really hard on dragging their little buddy out of that pool. It was the most endearing thing I ever saw. Who wouldn't want a puppy like that?

Today, Jasmine is six and a half years old and she is the puppy of my life. She has her own ranch, her own dog, a crew of vets to help me to take care of her, her own driver and her own maid (that would be me). She's been through a lot in the past year, but always remained as adorable, loving, and caring as she was when I first saw her. We would do anything for her, and she would do anything for us.

As you're reading this, you might be thinking, so what is wrong with all that?

Nothing, as long as you're really ready for having a puppy in the house.

As cute and adorable as puppies are, they'll pee and poo where they shouldn't and they will chew things you don't want them to. They will need a lot of attention. They might get sick.

Unless you're ready for that, it might not end up well for the puppy. I saw a puppy who was tossed in the yard in the middle of the winter. They put out an old mattress out there for him. That was it. Out in the cold—literally.

As puppies grow into dogs it might not get any easier if you don't know what you're doing. Dog shelters are a sad witness to that.

Getting a puppy requires commitment. The rewards will be many. But if you're not ready to commit, please don't get one.


Related articles:
Jasmine
Why Do We Choose the Breeds We Do?
Outsmarting a Smart Dog
The Many Reasons Why I Love Our Dogs: Loyalty