Does Your Vet Listen To You? 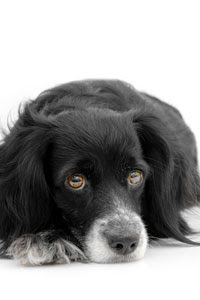 One of the things that make our vet so amazing, and why we travel a long way to see him, is that he listens to what we're telling him. Is that a big deal? You bet it is.

By listening I don't mean letting you talk, I mean actually listening to what you are saying and taking it into account.


Your vet knows the medicine (at least you'd hope so) but you're the one who knows your dog. You know things you vet cannot unless he finds out from you.

Listening is a lost art, and veterinarians don't seem to be an exception.


My observation is that they often quickly jump to the most obvious conclusion, make up their mind, and shut down to anything you might have to say.

Sometimes it's about time. They want you in and out as fast as possible. Sometimes it's simply because they believe that owners don't know anything.

So why does it matter?

How can a vet reach the right conclusions without all the information?


They cannot. Every conclusion is only as good as the information that it is based on.

In routine situations, they can get away with it with no harm done. But what if things are not so simple?

Neither a misdiagnosis or a missed diagnosis is going to help your dog.


It seems quite likely that Jasmine's first ACL injury wasn't actually her first. But when we took her to her vet at the time, we were sent home with “it looks like some soft tissue injury...”.

When we took her to the vet because I was convinced that something wasn't right with her mouth, we were told that nothing was wrong. Guess what? It was – as we found out much later.

When we kept taking her to the vet because she was having episodes of distress of some kind, and a battery of tests didn't lead to any diagnosis, I felt that one of the important signs might have been that she was trying to bury her pee. I said that to the vet. He replied that it is normal. I was trying to explain that she is not scoring the ground (which is normal) but that she's trying to cover it up by pushing dirt over it with her nose. But the vet already wasn't listening.

Next time we came in with the same issue, which kept getting worse, and still with no diagnosis, I mentioned it again. Guess what? He replied that it is normal. So I tried to explain the difference again, but I never got through to him.

When Jasmine was in an ICU as a result of severe hyperthermia (reaction to medication), she was in such a bad shape, she couldn't walk. Her mobility didn't seem to be improving, which worried me a lot. They were subscribing it mostly to her recent bi-lateral ACL surgeries. We were trying to explain, that before this trauma, she had full use of her legs, and was walking, running and jumping with no problems. But they already seemed to have made up their minds that the knees were the main reason and, again, turned off to what we were saying.

Today, while still work in progress, Jasmine is doing great. But could the path to it have been much shorter were the vets listening to us?

How can one fix something without taking the time to find out what is really going on? Listening to what you have to say is an important part of it.

Does your vet listen to you?

Related articles:
Where There Is Smoke, There Is Fire!
It's Your Dog's Health!
Help! My Dog Is Purple!
Veterinary Drive-Thru: Coming Soon To A Veterinary Hospital Near You!
A Praise To Our Dog House DVM
A Word On Pain