"Natural" With Regard To Dog Nutrition (Part I): What Does It Mean And Does It Matter?

January 05, 2012
Those of you, who are interested in matters of dog nutrition, will be pleased. I am taking a dog nutrition course and I will share my findings, thoughts, and questions with you. Here is what I'm pondering upon.

The term natural is a subject of many debates.

That is mostly because of its unclear definition, particularly when it concerns dog nutrition and dog food products. It is true, there is no legal standard of natural in terms of dog food labeling. But that's not what we're going to be talking about.

What does the word natural mean to you?

Here are some definitions of the word as you might find it in a dictionary:

-of, pertaining to, produced by, or existing in nature; without artificial modification; unadulterated
definition by Wordsmyth.net


-present in or produced by nature; not altered, treated, or disguised
definition by The Free Dictionary


-existing in or caused by nature; not made or caused by humankind; of or in agreement with the character or makeup of, or circumstances surrounding, someone or something
definition by Oxford Dictionaries


To me, natural means as produced by, or existing in nature; unadulterated; and also whole (this is important for the purpose of the rest of this discussion).

I also like the bit that says in agreement with the character or makeup of something. I think that is pretty important also, as you will see further on.

The second argument of those opposing the pro-natural movement in dog nutrition is that there are things in nature that are poisonous and even deadly.

Meaning that just because something is natural doesn't make it good.

True. Coming from a country where mushrooming is ever so popular, I know quite well that not everything is edible what looks like a mushroom. In fact, we have a saying: "All mushrooms are edible but some of them only once."

Some of these poisonous guys look quite appetizing, don't they?

So yes, there are things in nature that are bad for you. Viruses, tornadoes, hurricanes, some mushrooms ...

So where does that leave us?

Just recently I had a discussion with our vet about one of the latest studies that shocked the pants off everybody. It was a study that was meant to prove that vitamin E has anti-cancerous properties but instead it found that the opposite happened: Prostate Cancer Risk from Vitamin E Supplements.

Original paper: Vitamin E and the Risk of Prostate Cancer

Why were the results so shocking? Because it was believed that vitamin E should act to prevent cancer, not to increase its risk! In fact, that's what the study was intended to prove. So how come it came out all wrong?

Here is one theory.

The study says the trial was done with all rac-α-tocopheryl acetate. (that's what most vitamin E supplements are)

All rac what? Vitamin E is vitamin E, isn't it?

Well, according to my course instructor, Dr. Ava Frick, DVM, and other sources I checked out, not really.

In fact, there are two potential issues that could have been behind the disappointing results of that trial.

This is where we get back to the definition of natural.

First of all, alpha-tocopherol is only one out of a number of compounds found in a natural vitamin E (also referred to as vitamin E complex). The whole vitamin E would look something like this: 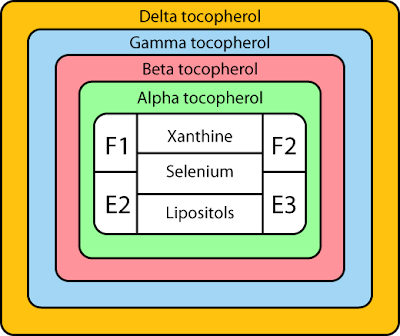 It's got a whole bunch of things in it. According to my course, the four different tocopherols are four protective antioxidant layers, with some very important stuff inside.

The Encyclopedia of Canine Clinical Nutrition (2006) says this about vitamin E:

Natural vitamin E is composed of 8 isomers. Each of these has a specific biological activity. Only alpha-tocopherol is synthesized.

Isn't it curious that only one of all the compounds is being synthesized and labeled as vitamin E while it is, in fact, only a part of it? (Yes, I know that the diagram has more compounds than 8, I'm not sure why, yet. Point being, there certainly is not just one)

The point being made in my course is that regardless of whether the alpha-tocopherol alone is a good thing or not, the whole form of the vitamin E was around way longer than the synthetic fragment and that's what critters evolved to utilize, and that the components of the whole vitamin E work together (here is that word again - synergy)

This argument is about the fact that living critters evolved in synergy with their environment and food source.

And it gets even more interesting.

All-rac-alpha-tocopheryl acetate is a racemic mixture of stereoisomers.

I know, right, what happened to English?

What this means is that things are not only defined by their chemical components, but also by their structure/rotation. You wouldn't think something like that would matter, right? I wouldn't either. And yet, it does.

Living organisms like having them all facing one way. However, the synthesized version ends up with half facing one way and half the other way.

Why the heck would rotation matter if it is a mirror image of the same thing?

Here is an interesting figure I stumbled upon when I was dabbling into biology to better understand some of these concepts (I wandered off all the way to sensory perception).

These two guys are chemically exactly the same, except being mirror images of each other. And yet one is perceived as spearmint and the other as caraway. (I'm including the link because you might not be familiar with that one, where I come from we use it a lot. What's important is that each smells completely differently)

So the direction does seem to matter.

However, it seems that it is impossible to create a synthetic version with just one or the other direction; when it comes out of the lab, it comes out two-faced. (sorry for the pun)

Here is what Dr. Kevin Ahern of Oregon State University says regarding proteins (I've been watching his biology classes, I love the guy):

Living cells can use only the one type (rotation) and cannot use the other. (loosely quoted)

Interestingly study done on beta-carotene supplement for lung cancer prevention in smokers ended up with same disappointing results as the vitamin E study:

Taking beta-carotene actually seems to increase the risk of lung cancer in people who smoke (especially those smoking more than 20 cigarettes per day), former smokers, people exposed to asbestos, and those who use alcohol (one or more drinks per day) in addition to smoking. However, beta-carotene from food does not seem to have this adverse effect.


Doesn't this put an interesting spin on the topic of natural in dog nutrition?

I wanted to talk more about what I learned about the individual components of the natural vitamin E but this article is already way too long, so next time.

What does natural mean to you?